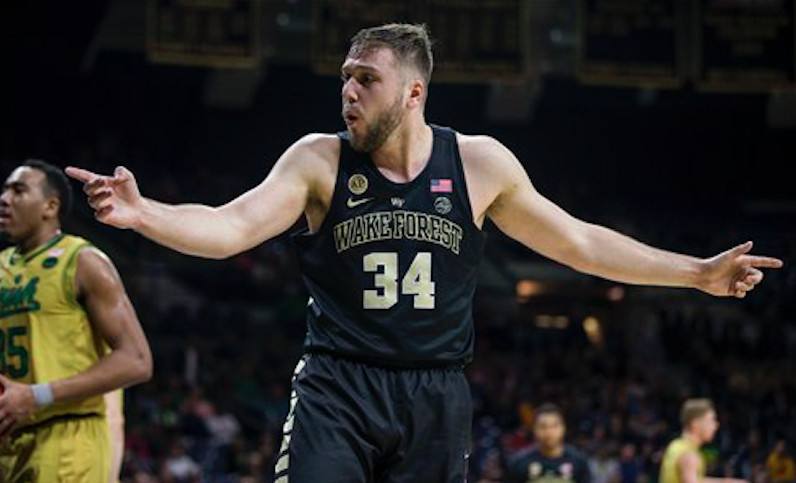 Wake Forest’s Austin Arians (34) questions a call during the second half of his team's Feb. 7 loss at Notre Dame. (AP Photo)

Danny Manning had a long list of things to fix when he arrived at Wake Forest in 2014.

Perhaps the biggest of those problems was the Deacons’ struggles against conference foes away from Joel Coliseum. As Year 3 of the Manning era comes to a close, that problem still hasn’t gone away.

Heading into a Jan. 21 game against NC State, Wake Forest had lost 48 of its last 51 games against ACC teams in road and neutral settings. The troubles dated back to the beginning of Jeff Bzdelik’s tenure in 2010-11.

But the Deacons beat NC State in Raleigh that day, then played Syracuse tight in an 81-76 road loss. On Jan. 31, Wake won at Boston College.

Along with other improvements this season, Manning had finally solved those road woes. Or at least it seemed like it.

Not so fast. The Deacons surrendered 52 second-half points and lost at Notre Dame, a game they desperately needed for their tournament résumé. Then came a fumbling loss to Clemson on Tuesday. That particular defeat serves as a major blow to Wake’s Big Dance hopes.

In the must-win contest versus the Tigers, the Deacons turned the ball over 18 times, seven by Bryant Crawford. Seven of the team’s turnovers came in the final 10 minutes of the first half, turning a small Wake Forest lead into a 14-point deficit. Even worse, most of them were unforced errors — just careless, sloppy play.

The Deacons also played poor defense, another problem that hasn’t gone away, fouling 29 times and giving up 95 points to a team averaging 71 in conference play.

Looking back, Wake Forest’s road wins aren’t really that impressive; NC State is in free fall and might fire its coach, while Boston College is the bottom of the ACC barrel. The Deacons almost blew the NC State game and trailed midway through the second half against Boston College. Really, Wake just took care of the business it had to take care of to move out of the cellar.

Manning has a few chances to change the narrative down the stretch, and his postseason — even NIT — hopes could be riding on getting at least one win on the road and another in the ACC Tournament. But it won’t be easy.

The Deacons haven’t won at Duke since 1997, and they’ve lost 20 straight to the Blue Devils between road and neutral floors. They close the season at Virginia Tech, and although they won there in 2014 under Bzdelik, that’s the only win in Blacksburg since 2005. Wake has lost eight of its last nine to Virginia Tech at road or neutral sites.

Then there’s the ACC Tournament, which has long been a problem zone for the Deacons, other than a couple championships with Tim Duncan and Randolph Childress. If Manning wants to make some noise, he’ll have to go to Brooklyn and buck the trend; the program has only one win in the last nine league tournaments.