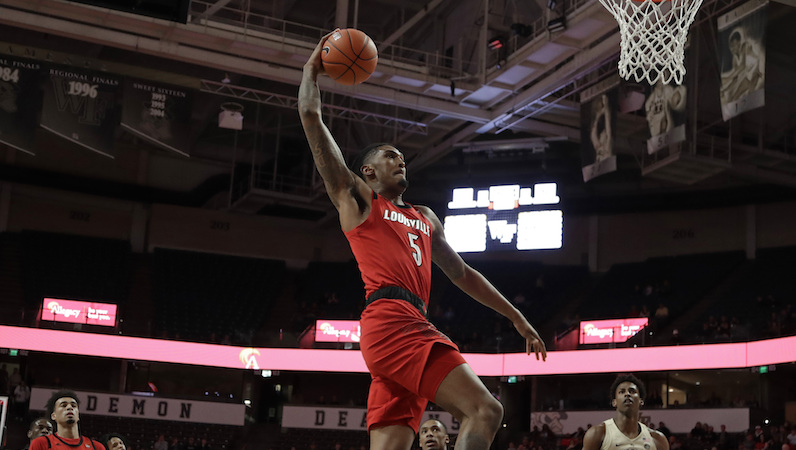 It’s really cold outside. Stay indoors, grab a blanket and some coffee and watch basketball. Ride this thing out. Also, here’s what’s happening around the ACC.

Up by 35 points at one time, Louisville destroyed Wake Forest in Winston-Salem on Wednesday night, 82-54. Dwayne Sutton slapped up a double-double (17 points, 10 rebounds), while Jordan Nwora went for 20 points, again.

Hokies say “NAW” to the Hurricanes

Syracuse wins on the road at Boston College

Tyus Battle led the way with 31 points, including 21 in the second half, six assists and only one turnover as Syracuse won 77-71 at Boston College. Ky Bowman and Jordan Chatman each scored 21 points for the Eagles, too.

It’s been a whirlwind offseason for the Virginia Tech football program, but the Hokies may have some good news here. After running for 433 yards in 2018, McClease returns to Tech as the Hokies leading rusher.

Virginia Tech #Hokies RB Deshawn McClease has withdrawn his name from the NCAA Transfer Portal. A week later, the No. 1 RB has chosen to return to VT @247Sports https://t.co/if8s28vDxH

North Carolina basketball offered a scholarship to one of the most coveted prospects in the 2020 class: Walker Kessler. A 5-star center out of Georgia, Kessler is a top-15 prospect already with offers from Duke, Virginia, Michigan, Florida and Vanderbilt.

There was big news out of Raleigh on Wednesday morning as NC State announced its replacement for Debbie Yow, set to retire later this year, as director of athletics: Boo Corrigan.

Also: Here’s David Glenn with a quick hit from his radio show on the transition from Yow to Corrigan.

Quick hit from @DavidGlennShow as @PackAthletics gets ready to shift from the success of Debbie Yow to its new AD, @BooCorrigan https://t.co/DSyvHxQOTo

Was Zion Williamson’s performance at Notre Dame the best so far of his Duke career?