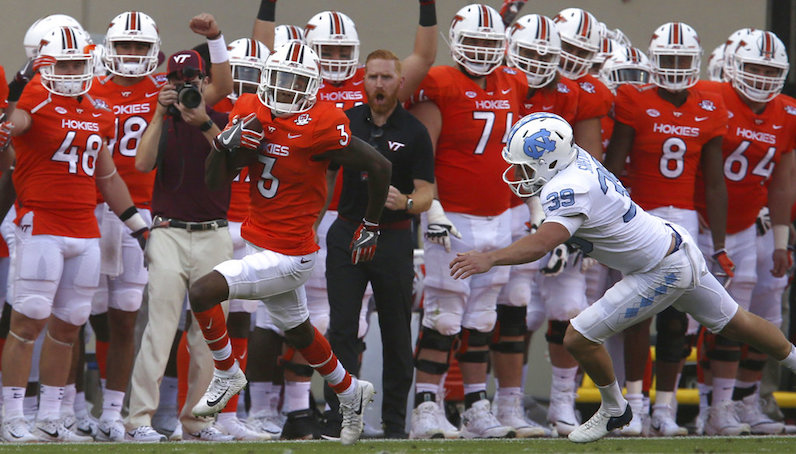 Greg Stroman returns the ball in the first half of the Virginia Tech - North Carolina football game in Blacksburg Va. Saturday October 21 2017.

The Atlantic Coast Conference Football Players of the Week have been recognized following their performances in week eight of the 2017 season.

Hall broke a century-old school record while slicing through the nation’s No. 16 rushing defense for a career-high 254 yards and three touchdowns in Saturday’s 24-17 win at Duke. Hall averaged 10.6 yards on 24 carries facing a Blue Devil defense that was surrendering a mere 108 yards per game on the ground. Hall ripped off touchdown runsof 79 and 92 yards. The latter score marked the longest touchdown run in Pitt history, eclipsing the 100-year-old record of 91 yards established in 1917 by George McLaren (who played under legendary coach Pop Warner). Hall’s third touchdown was a four-yard score with 10:48 left that gave Pitt the lead for good at 21-17. Hall’s performance helped the Panthers to a season-high 336 rushing yards, more than triple what Duke had been yielding heading into the contest.

Devine helped pave the way for Georgia Tech’s 427 rushing yards by taking 10 defenders to the ground in Saturday’s night’s 38-24 win over visiting Wake Forest. The majority of the 6-7, 380-pounder’s 10 knockdowns came at the point of attack on the interior of Georgia Tech’s offensive front.

Herndon caught a career-high 10 passes and totaled a career-best 96 yards with one touchdown in a 27-19 victory over Syracuse. Herndon bested his previous career high of eight catches set earlier this year against Toledo, and had already set a career mark for receiving yards by the time the first half concluded. Herndon, who came just two catches shy of tying Miami’s single-game all-time reception mark, has already matched his last season’s reception total (28) and touchdown total (two).

Walker had four tackles, including 1.5 sacks, and a fumble return for a touchdown in Virginia Tech’s 59-7 win over North Carolina. With five minutes left in the first quarter and the game still scoreless, Walker recovered a fumble at the North Carolina 19-yard line and raced into the end zone to put Virginia Tech ahead. It was Walker’s first career touchdown and the first of three non-offensive scores by the Hokies against the Tar Heels. Walker’s 1.5 sacks set a new career high. His solo sack came on a second-and-24 from UNC’s 16-yard line early in the first quarter, when he dropped the quarterback for a six-yard loss.

Pinckney was a force in the middle of Miami’s defense Saturday, helping lead the Hurricanes to a 27-19 victory over Syracuse at Hard Rock Stadium. Pinckney led all Hurricanes with nine tackles (six solo) and added career-best marks in both tackles for loss (3.5) and sacks (2.5). Pinckney had two solo sacks in the victory – marking the first multi-sack performance of his career – and helped the Miami defense become the first ACC unit to hold Syracuse without a first-half touchdown. He was also named the Walter Camp National Defensive Player of the Week on Sunday.

Whitehead, owning significant run and pass responsibilities against Duke, was a highly productive defender in Pitt’s 24-17 win. Whitehead compiled a team-high 10 tackles, added a pass breakup and had the game-clinching interception. He was an integral figure in helping limit the Blue Devils to just 76 yards on the ground (Duke had been averaging 190 rushing yards). With Pitt clinging to a seven-point lead in the game’s waning moments, the Blue Devils mounted a final drive, reaching the Panthers’ 22-yard line. But Whitehead ended the threat and the game with a diving interception at the Pitt 8-yardline line with 45 seconds remaining.

Brown finished 19-of-24 passing for a career-high 275 yards in the Eagles’ 41-10 win at Virginia. The freshman also threw for a career-high three touchdowns. Brown is the first Boston College player with three passing touchdowns and zero interceptions in a conference game since Quinton Porter in 2003. The Eagles scored 40-plus points in consecutive ACC games for the first time in school history. The last time Boston College scored 40-or-more points in back-to-back games was against Rutgers (44-14) and Toledo (51-25) in the final two games of the 2002 season. Brown completed a career-long 76-yard pass to Kobay White and found tight end Tommy Sweeney for a pair of touchdowns.

ACC Players of the Week, led by BC’s AJ Billon