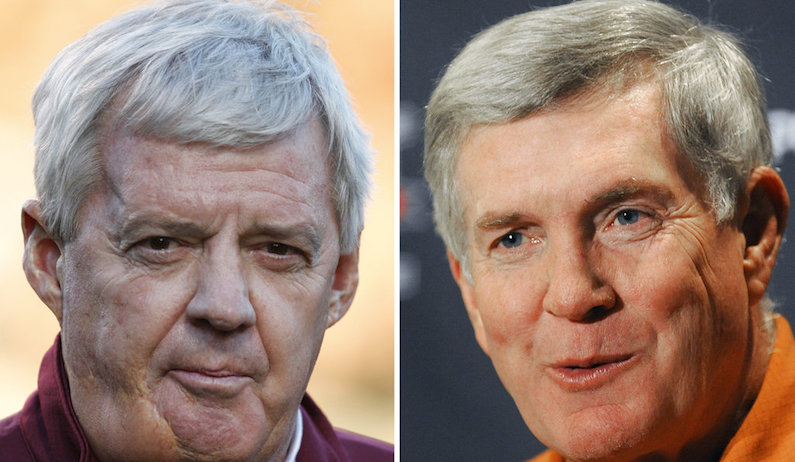 The winningest coach in Virginia Tech history, Frank Beamer’s 280 career victories rank sixth in FBS history and are the 13th most by a college football coach at any NCAA division. He led the Hokies to their first-ever national title game appearance as part of an impressive streak of 23 consecutive bowl berths in his final 23 seasons.

Beamer began his 35-year head coaching career at Murray State from 1981-86, and he ranks fourth in school history in wins after leading the Racers to a 42-23-2 record in six seasons. In 1986, he guided the team to a share of the Ohio Valley Conference title and a trip to the FCS Playoffs.

In 1987, Beamer became the head coach at his alma mater Virginia Tech, where would win a school-record 238 games in 29 seasons (1987-2015). Arguably, his best season came in 1999 when he earned consensus National Coach of the Year honors after leading Virginia Tech to an appearance in the BCS National Championship at the Sugar Bowl following the program’s first 11-win season and first undefeated regular season in school history. Under Beamer, the Hokies posted five top-10 finishes and became one of only six programs in college football history to go to a bowl game in at least 20-straight seasons. After just one win in six bowl games prior to his arrival, Beamer would win 11 of his 23 appearances, including marquee wins in the 1995 Sugar Bowl, 2009 Orange Bowl and the 2009 Chick-fil-A Bowl. His Hokies are also one of just four teams in Division I history to produce 10 wins in eight or more consecutive seasons (2004-11), and his 23-straight seasons of seven or more wins are a school record.

One of his lasting legacies is “Beamerball,” the name given for the Hokies’ ability to make big plays and score on offense, defense and special teams. Beamer’s teams blocked more kicks in the 1990s than any other FBS program, helping him earn BIG EAST Conference Coach of the Decade laurels.

Beamer started three years as a cornerback at Virginia Tech for College Football Hall of Fame coach Jerry Claiborne. Before becoming a head coach, he served as an assistant coach at Maryland, The Citadel and Murray State. A member of the Virginia Tech Sports Hall of Fame, Beamer’s No. 25 jersey was retired by the school in 2002, his name adorns the Hokies’ locker room and the street in front of Lane Stadium is known as Beamer Way. He currently serves as a special assistant to the athletics director at Virginia Tech, and he is a member of the College Football Playoff Selection Committee.

Highlighted by a national championship win at Texas, Mack Brown led his teams to 22 bowl games during a remarkable 30-year career as a head coach. His 244 career victories are the 10th most by a coach in FBS history.

Brown began his successful head-coaching career with a one-year stint at Appalachian State in 1983, leading the Mountaineers to a 6-5 record. After a successful season as the offensive coordinator at Oklahoma under Hall of Fame coach Barry Switzer, he became the head coach and athletics director at Tulane in 1985. He led the Green Wave to a 6-6 record in his final year in 1987 and a trip to the Independence Bowl, its first bowl appearance in seven years.

During 10 seasons as the head coach at North Carolina from 1988-97, Brown won 69 games – tied for the second most victories in school history. Brown’s Tar Heels would post winning records in his final eight seasons and go to bowl games every year beginning in 1992, including a win in the 1993 Peach Bowl, the program’s first bowl appearance since 1986. The 1996 ACC Coach of the Year led North Carolina to three 10-win seasons, and the team finished in the top 25 four times, including a No. 10 ranking in 1996 and the No. 4 spot in 1997.

It was at Texas from 1998-2013 where Brown would see his greatest success. Boasting the highest winning percentage (76.7%) in school history among coaches with at least 10 years at the helm, his 158 career wins are second only to Hall of Fame coach Darrell Royal in Longhorn history. During the 2005 season, Brown guided Texas to its first national championship in 35 years after defeating Southern California at the Rose Bowl in one of the greatest games in college football history. The 2009 Big 12 Coach of the Year won two conference titles (2005, 2009), four Big 12 South Division titles and led the Longhorns to another appearance in the BCS National Championship following the 2009 season. A two-time National Coach of the Year at Texas, Brown won more than 10 games in nine consecutive seasons, and his teams posted 13 top 25 finishes, including seven in the top 10. He posted a Big 12 record 21 consecutive conference wins from 2004-06, and he led the Longhorns to bowl games in all but one season, winning 10.

A native of Cookeville, Tenn., Brown played running back at Vanderbilt and Florida State. Before his first head coaching job at Appalachian State, he served as an assistant coach at Florida State, Southern Miss, Memphis, Iowa State and LSU. A member of the Texas Longhorns Hall of Honor, Brown is also enshrined in the Rose Bowl, State of Texas Sports, State of Tennessee Sports and Holiday Bowl halls of fame. He currently serves as a college football studio and game analyst at ESPN and as a special assistant at Texas.

Arguably the greatest wide receiver in Georgia Tech history, Calvin Johnson rewrote the school record books and ended his career receiving the Biletnikoff Award as the top receiver in the nation. He is the 14th Yellow Jacket player to enter the Hall.

One of just six Yellow Jackets to be a two-time First Team All-American, Johnson earned unanimous honors as a senior and became the first three-time First Team All-ACC selection in program history. The Tyrone, Ga., native remains Georgia Tech’s all-time career leader in receiving yards (2,927), touchdown receptions (28) and 100-yard receiving games (13). Johnson’s best year came in 2006 when he won the Biletnikoff Award and was named the ACC Player of the Year after leading the Yellow Jackets to the Coastal Division title. A team captain that season, he placed in the top 10 for the Heisman Trophy after setting single-season school records for receiving yards (1,202), touchdown receptions (15) and 100-yard receiving games (7).

The 2004 Freshman All-American and ACC Rookie of the Year helped Georgia Tech to three consecutive bowl games, including a win in the 2004 Champs Sports Bowl. A seven-time ACC Player of the Week, Johnson ranks 15th in conference history in career receiving yards and is tied for seventh in career touchdown receptions. “Megatron” also sits in the top 10 in Georgia Tech annals in five other receiving categories, currently ranking second in both career and single-season receptions. He was elected to the Georgia Tech Sports Hall of Fame in 2016.

The second overall pick in the 2007 NFL Draft, Johnson spent his entire nine-year career with the Detroit Lions. The Lions’ all-time leading receiver was a six-time Pro Bowl selection and owns the NFL record for single-season receiving yards.

Off the field, he founded the Calvin Johnson Jr. Foundation to help at-risk youth and provide financial assistance to community organizations. He is currently working as a private wide-receiver consultant, working with players at the high school, collegiate and professional levels, and he says he plans to return to college.

One of the best defensive players in Miami history, Ed Reed twice earned First Team All-America honors while guiding the Hurricanes to a national championship. The St. Rose, La., native becomes the seventh player in school annals to be inducted into the College Football Hall of Fame.

A unanimous First Team All-American in 2001 and a consensus honoree in 2000, Reed led the Hurricanes to four consecutive bowl victories, ending his career with a perfect 12-0 record and a national championship after defeating Nebraska in the 2002 Rose Bowl. He also led Miami to a win over in-state rival Florida in the 2001 Sugar Bowl. The 2001 Big East Defensive Co-Player of the Year led the Hurricanes to consecutive conference titles as a junior and senior. A finalist for the 2001 Jim Thorpe Award, Reed was a three-time All-Big East selection, earning first team honors his last two seasons after receiving second team laurels as a sophomore.

Selected in the first round of the 2002 NFL Draft by the Baltimore Ravens, Reed played 11 seasons with the franchise before ending his career with the Houston Texans and New York Jets in 2013. The nine-time Pro Bowl selection led the Ravens to a championship in Super Bowl XLVII following the 2012 season. Reed is a member of the Baltimore Ravens Ring of Honor and the NFL All-Decade Team of the 2000s.

Off the field, he established the Ed Reed Foundation to help youth in underserved communities. He hosts charity golf tournaments and football camps while annually providing full Thanksgiving meals to approximately 600 families. Reed is a member of both the University of Miami Sports Hall of Fame and the Hurricanes’ Ring of Honor.

1. First and foremost, a player must have received First Team All-America recognition by a selector organization that is recognized by the NCAA and utilized to comprise their consensus All-America teams.

2. A player becomes eligible for consideration by the Foundation’s honors courts 10 full seasons after his final year of intercollegiate football played.

3. While each nominee’s football achievements in college are of prime consideration, his post football record as a citizen is also weighed. He must have proven himself worthy as a citizen, carrying the ideals of football forward into his relations with his community and fellow man. Consideration may also be given for academic honors and whether or not the candidate earned a college degree.

4. Players must have played their last year of intercollegiate football within the last 50 years*. For example, to be eligible for the 2018 ballot, the player must have played his last year in 1968 or thereafter. In addition, players who are playing professionally and coaches who are coaching on the professional level are not eligible until after they retire.

5. A coach becomes eligible three full seasons after retirement or immediately following retirement provided he is at least 70 years of age. Active coaches become eligible at 75 years of age. He must have been a head coach for a minimum of 10 years and coached at least 100 games with a .600 winning percentage.

* Players that do not comply with the 50-year rule may still be eligible for consideration by the Football Bowl Subdivision and Divisional Honors Review Committees, which examine unique cases.