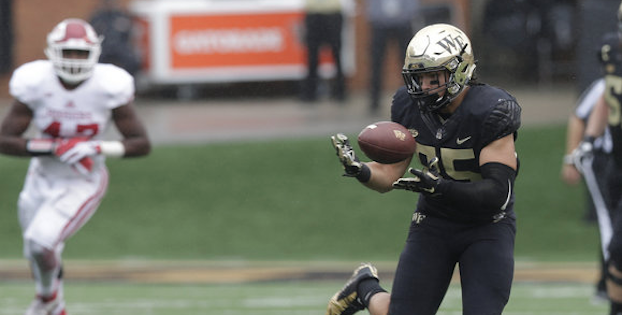 Cam Serigne has been one of the ACC's best tight ends during his time playing Wake Forest football. (AP Photo)

All-ACC representation is one sign of a program that’s succeeding in rebuilding its talent base. For example, Wake Forest placed two players on the three All-ACC football teams in the year before Dave Clawson arrived. That number doubled to four on last year’s three teams.

Let’s take a look at how the Deacons might stack up when it comes to honors for the 2017 season.

First, three of the four All-ACC players return; Marquel Lee is moving on to the NFL (Oakland Raiders). All three should have a good chance of returning to the All-ACC squads this season. Here’s a quick look at those three:

Clawson flipped Bates from a commitment to Toledo, his production last year as a redshirt freshman surprised many. Bates finished second on the team in tackles with 100, intercepted five passes and returned two for scores. His speed and anticipation meant he was constantly in the play, no matter where it was on the field.

Talent has never been an issue for Ejiofor. Staying healthy, though, has been a challenge. Ejiofor finally conquered his injury issues last season, posting 17 tackles for loss, good for eighth in the ACC. Only four players in the country accumulated more yards on their tackles for loss. Ejiofor also forced two fumbles and was versatile enough to break up four passes and intercept one.

Weaver has been the kicker every year of his college career, and he’ll land in a number of spots in the Wake Forest record books. The senior has struggled with range, though. He’s 37-of-42 for his career inside 40 yards, but just 10-of-22 outside. He’s only missed one extra point in three seasons.

Now let’s take a quick look at four players who we believe have a good chance to make one of the three teams:

After receiving honorable mention votes in his first two seasons, Serigne fell off last season as he battled nagging injuries. He averaged 50 catches his first two years, but he dropped to 30 last year. He hauls in several targets, especially in the red zone (12 career TD catches), so he has the potential to put up big numbers.

As a freshman, Maggio finished eighth in the league at 42 yards per punt. He adapted well to Clawson’s desire to vary his punting styles (standard vs. rugby) and had excellent ball control.

Hines has started in the slot since arriving as a true freshman, and he’s caught 70 passes in two seasons. While Hines hasn’t made the big jump yet, he has good speed and hands; he started to make some spectacular catches last season. If the Deacons can rev up their pass protection, Hines could haul in a big number of passes.

So we’re mentioning a running back for a program that has been awful on the ground for a number of years now? Yes, we’ll throw it out there. A few factors are working in Carney’s favor. He possesses an excellent combination of speed and power, so he doesn’t have to come out in goal-line situations. He can also catch passes.

However, Wake will consistently split his carries between Carney, Matt Colburn and perhaps Akeem Byrd. But Carney has the talent and work ethic to garner some attention — if the line can open a few holes.