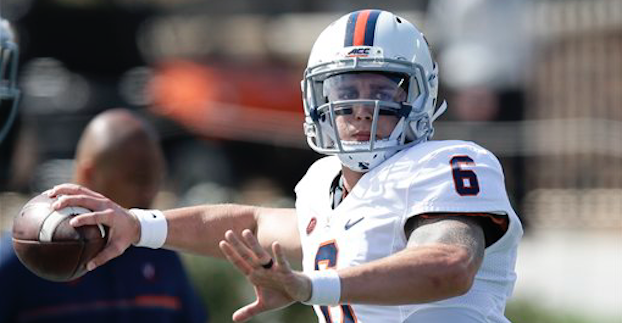 Injuries are always a threat to derail an offense, and Virginia learned that the hard way in 2016. Making matters worse, in the Cavaliers’ case, those injuries hit some of the team’s biggest weapons.

But along with adding a trio of graduate transfers to boost the offensive line, perhaps the greatest potential gain for the Wahoos offense comes from bringing back healthy versions of quarterback Kurt Benkert and versatile receiver Olamide Zaccheaus.

Benkert played all season with a large knee brace and further injured the surgically repaired joint early in the fall. Zaccheaus had a nagging hamstring issue that limited him at times. Still, Benkert threw for more than 2,500 yards while Zaccheaus hauled in 51 passes for 584 yards and seven touchdowns.

The improvement of those two could be the key to UVA making major strides in 2017. After a full year working together — Benkert transferred in from East Carolina after spring practices in 2016 — the pair has developed greater chemistry and is ready for what could be a breakout season for each.

At 5-8 and 190 pounds, Zaccheaus is fast and shifty. The Cavaliers have found ways to utilize him as a receiver, ball-carrier and return man. He has impressed more than ever this spring.

“That’s what he does,” Benkert told the Virginian-Pilot. “He’s a small guy, but he’s strong. He’s really strong, and he’s fast. He has been carrying the pile all spring, and it’s something I wasn’t used to seeing coming out of him. So it’s cool to see.”

In the modern era of Virginia football, a common theme among most of the best Cavaliers teams has been a dynamic duo in the passing game.

Quarterback Shawn Moore and wideout Herman Moore took UVA to the top of the AP poll in the early ‘90s. Matt Schaub hooked up with record-setting receiver Billy McMullen for two years; after that, Schaub connected with tight end Heath Miller for nearly 1,000 yards as a senior. Even Mike Rocco and Kris Burd fit the bill, connecting for 913 yards on the 2011 Chick-fil-A Bowl team.

With Taquan Mizzell out of eligibility, the Cavs will need another big-play threat to step up. Zaccheaus brings a similar skill set, and if Virginia improves its quarterback situation, then a big year might be in store for the little receiver.