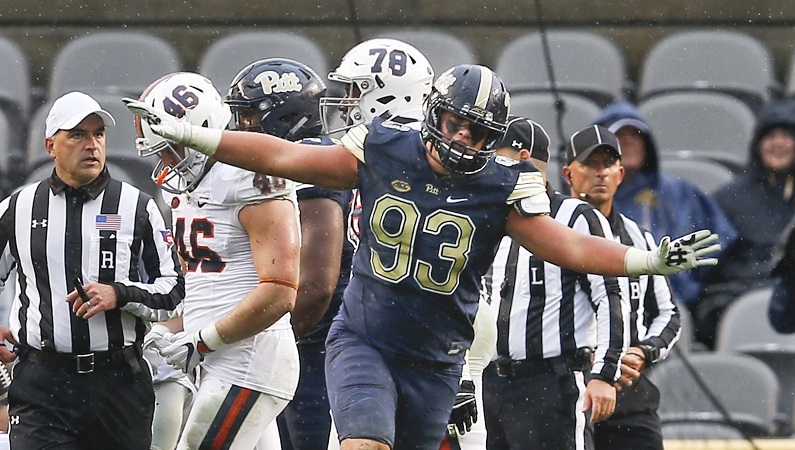 Pittsburgh defensive lineman Shane Roy (93) celebrates after the Pitt defense stopped Virginia on a fourth down near the goal line during the fourth quarter of an NCAA college football game, Saturday, Oct. 28, 2017, in Pittsburgh. Pittsburgh won 31-14. (AP Photo/Keith Srakocic)

The first weekend of November was painful for ACC Coastal Division teams in the state of Virginia, as both UVA and Virginia Tech suffered home losses. Pitt took down Virginia in a Friday night encounter in Scott Stadium, while Virginia Tech fell to Boston College in Lane Stadium.

Despite the pair of losses, however, the Cavaliers and Hokies remain two of the top three teams in terms of positioning in the Coastal Division. The other is a surprise – Pittsburgh.

Pitt’s victory over UVA has pushed Pat Narduzzi’s squad into first place in the Coastal, while positioning the Panthers to control their own destiny in the divisional race. Although Pitt has not yet attained bowl eligibility at 5-4, the Panthers are 4-1 in ACC play.

Despite a loss at North Carolina, the Panthers have beaten everyone else they’ve played in the ACC – a list that includes three bowl-eligible teams in Syracuse, Duke, and UVA.

Pitt hosts Virginia Tech Saturday in what may be the most important Coastal Division game of the season thus far. If the Hokies win, they’re right back in the thick of things, tied at 4-2 with the Panthers and holding the tiebreaker between the two schools. But if Pitt holds serve on its home field and beats VT, the Hokies will be effectively eliminated from the Coastal race.

The Hokies, despite their loss to Boston College, still control their own destiny, with Coastal Division matchups against each of the top three contenders – Pitt, Miami, and Virginia Tech – between Nov. 10 and Nov. 23. At 3-2 in ACC play, Virginia Tech could still set the stage for a potential showdown with Virginia in Blacksburg Nov. 23 with everything on the line. But they’ve got to beat Pitt.

If the Hokies can win out, picking up key tiebreakers along the way, a 6-2 conference run would put Justin Fuente’s club over the hump and back into the ACC Championship Game.

UVA steps out of ACC play this weekend for an in-state clash with Liberty, then closes with Georgia Tech and Virginia Tech. The Cavaliers no longer control their own destiny, and a tie with Pitt means the Panthers go to Charlotte for the ACC Championship Game.

UVA needs to win out, and hope Pitt melts down as the season concludes, for the the Cavaliers to have a shot at prevailing in the Coastal.

The upcoming matchups with Pitt, UVa, and Virginia Tech are the swing games that will make or break the Coastal Division hopes of all three of these schools. If they beat up on each other, it will open the door back up for a schools like Miami or Georgia Tech to possibly jump back into the race.

The Canes lost at Virginia and Boston College to slip to 2-2 in ACC play, and then suffered a stunning 12-10 loss at home to Duke to slip to 2-3.

Many fans might laugh at the notion that the Canes are still in the Coastal Division hunt at 2-3. But Miami still plays Virginia Tech and Pitt – opportunities for key tiebreaker wins. Wins over the Hokies and Panthers will put Miami back in the hunt. But they will have to win out, while getting some help, to have a chance of claiming a share of the Coastal Division.

Georgia Tech’s recent wins over Virginia Tech and UNC also keep the Yellow Jackets in the mix. GT also must win out, beating Virginia and Miami. But if they do, and get help in the form of two Pitt losses and at least one Virginia Tech loss, they could forge a tie atop the division.

It all makes for a wild month three weeks of action in the Coastal Division, with almost every game down the stretch harboring championship implications.