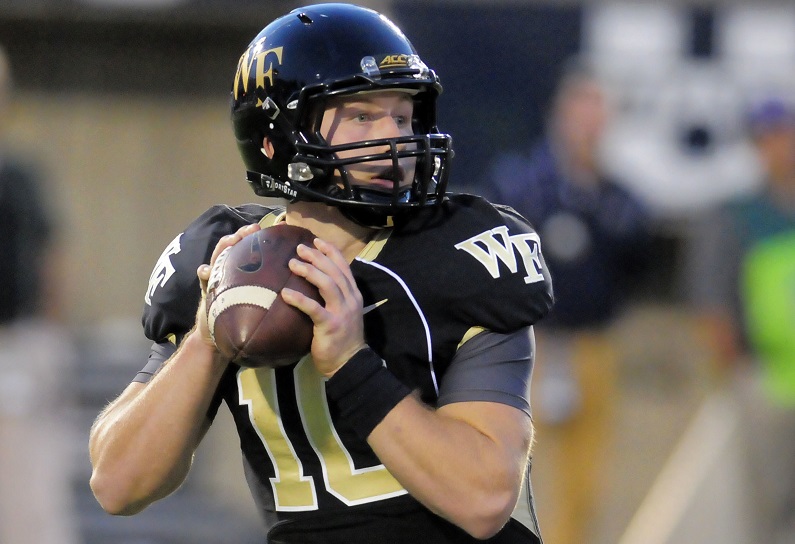 The Deacons opened their 2017 football season with a swing pass to the left flat to Cade Carney out of the backfield.

That play call was an interesting choice, considering the lack of passes thrown to running backs in Dave Clawson’s three seasons at Wake Forest.

The Deacons and offensive coordinator Warren Ruggiero threw two other passes to running backs in the opener: another pass to the flat to Isaiah Robinson and a roll-out pass to Matt Colburn near the goal line.

It’s difficult to infer much from the 51-7 victory over Presbyterian, as Wake Forest certainly wasn’t trying to tip its hand in a blowout with Boston College up this week. However, it’s worth wondering whether the running backs will be any more involved in the passing game this season.

During Clawson’s tenure, the most catches by a running back was 18 by Tyler Bell in 2015. Last season, Colburn caught 13 and Carney 12. This comes despite the fact that the Deacons have had protection issues, meaning they were looking to utilize the short passing game.

For comparison, each of the ACC teams that won at least nine games last season — Clemson, FSU, Louisville and Virginia Tech — had a back that caught at least 18 passes. FSU’s Dalvin Cook led the way with 33 catches.

In addition, even the pass plays that the Deacons have run to their backs haven’t been very inventive. You haven’t seen backs angling back over the middle or running wheel routes down the sideline.

Some of that is an issue of the lack of backfield speed during Clawson’s time, and some is an issue of protection, as those routes take longer to develop. That time in the pocket isn’t something the Deacons have been able to create.

But Wake Forest has a veteran line this season, leading to hope for more time on pass plays. More important, it finally has a back with speed in redshirt freshman Arkeem Byrd.

The Deacons didn’t throw a pass to Byrd in the opener, and they didn’t show much in the spring that showed they were thinking of passing more to their backs. However, finding a way to get Byrd in space would be a good idea, as evidenced by his 51-yard run against Presbyterian.

Perhaps the real threat out of the backfield is another year away. The Deacons are hoping that they can redshirt Christian Beal, an early enrollee as a freshman this season. Beal (5-10, 180) totaled more than 2,000 yards receiving out of the backfield during his high school career.

Running backs played a significant role in the passing game during Jim Grobe’s best seasons. In the three bowl-game run from 2006-2008, backs caught more than 50 passes each season, individually topped by Josh Adams’ 34 catches in 2007.

It seems unlikely that Clawson and Ruggiero will jump to that level any time soon, but it’s worth watching whether they’ll diversify the passing game with their running backs this season.