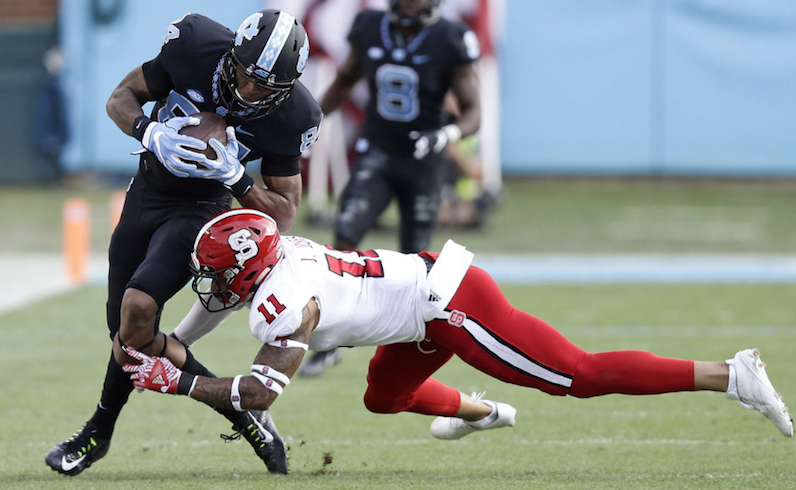 Josh Jones represents a bit of a milestone for Dave Doeren.

In December 2012, the safety became the first player to commit to NC State after the school hired Doeren.

The Green Bay Packers selected Jones in the second round of this year’s NFL Draft. Two other Wolfpack players also heard their names called: running back Matt Dayes (seventh round, Cleveland) and cornerback Jack Tocho (seventh round, Minnesota).

Doeren gets some credit for recruiting Dayes; the ball-carrier backed off his pledge to NCSU after the 2012 coaching change. He had planned to sign with Vanderbilt, but a change of heart led him to stick with NC State.

Tocho, however, was a camp discovery by the O’Brien staff and remained firm through the coaching change.

Next year, though, could be a bigger indicator of the pro talent upgrade on the roster brought on by Doeren. Four defensive linemen in particular — ends Bradley Chubb and Kentavius Street, and tackles Justin Jones and B.J. Hill — have realistic shots to go in the 2018 draft. Those way-too-early mock drafts are unanimous in their assessment that Chubb will be NC State’s first Round 1 choice since Mario Williams went No. 1 overall in 2006. O’Brien never recruited a first-round pick to NCSU.

If the NFL can find a position for H-back Jaylen Samuels, he could become a draft pick as well. Interior lineman Tony Adams may attract a look, especially if a pro team deems him capable of playing center.

All six of those rising seniors were a part of Doeren’s first full recruiting class at NC State. In his tenure at NC State, O’Brien solely lured in 10 eventual NFL draftees — 11 if you count Dayes. A 12th, defensive tackle Markus Kuhn, signed after O’Brien came aboard but was a Chuck Amato holdover.