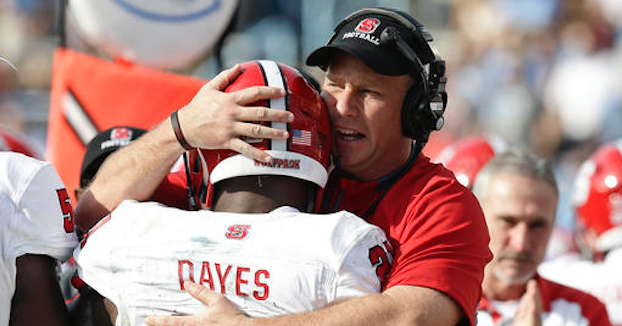 During my 26 years as an Athletics Director, I have held the belief that all programs should be evaluated at the conclusion of their respective seasons rather than in the midst of them.

With our regular season complete, I want to put to rest any speculation surrounding the future of Coach Dave Doeren and let our student-athletes, recruits and fans know he is our coach moving forward.

Our roster is composed of 65 percent freshmen and sophomores. Additionally, in 2017, we will return over 75 percent of our players currently in our two-deep, giving us experience and continuity moving forward.

Dave shares the values of our athletics department and University.  He and his staff recruit both character and talent to NC State.  And he runs his program with integrity.

We are now bowl eligible for the third consecutive year.  And while we have not yet achieved our goals as a program, we continue to make progress.

We remain committed to becoming a Top 25 program and Dave shares that vision.  We continue to support him, his staff and our terrific student-athletes.