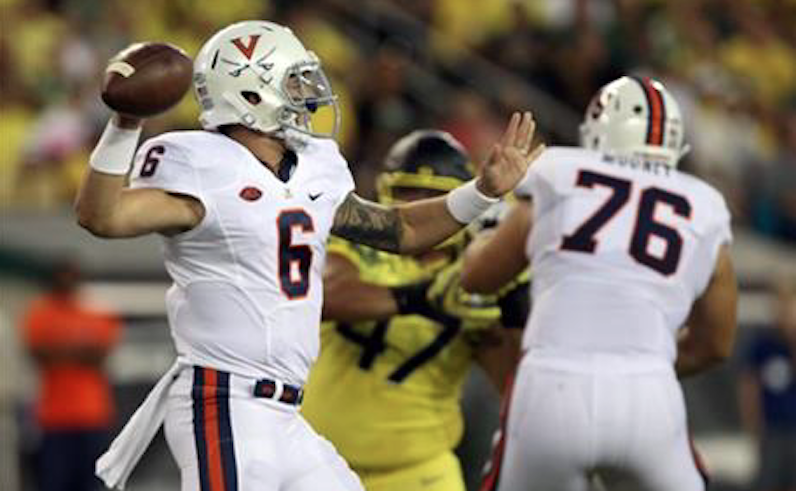 UVA quarterback Kurt Benkert battled a shoulder injury toward the end of the 2016 season. (AP Photo)

You’d be hard-pressed to find a program with less quarterback stability over the past decade than Virginia. Under former coach Mike London, in particular, the Cavaliers were rarely ever able to stick with a starter.

That was supposed to change last season with Bronco Mendenhall taking over for London and bringing in East Carolina graduate transfer Kurt Benkert. And though he showed promise early on, Benkert mostly disappointed, and the Cavaliers benched him late in the year.

Benkert returns for a final year of eligibility and this spring is the presumptive starter for 2017. So what can the Cavs expect out of the quarterback position this time around?

First, you have to take a look at what went wrong in 2016. Benkert has a lot of physical tools. His arm is strong, and when he’s healthy, he’s fairly mobile. But coming off a knee surgery that kept him out if spring drills at ECU, Benkert was never totally healthy last season, wearing a big brace and carrying about 20 extra pounds.

The brace and the weight are gone this spring, and Virginia coaches are optimistic he can do more with his legs. That would have been nice a year ago when the Cavaliers offensive line allowed its quarterback to get significantly more beaten up as the season progressed.

Benkert revealed at the start of spring practice that he played more than half of last season with a partially separated non-throwing shoulder.

“The shoulder definitely affected how I was playing,” Benkert told reporters who gathered at practice last week. “I was rushing things because I didn’t want to get hit.”

You can see it in the numbers. Benkert threw for 235 or more yards in six of his first eight games but didn’t top 200 in the final four games. Seventeen of his 21 touchdown passes came in that early stretch.

There could be some competition from Missouri transfer Marvin Zanders when he arrives in the fall. However, the Virginia coaching staff likes Benkert and brought him in with the intention of having a two-year starter to improve continuity.

Virginia assistant head coach Ruffin McNeill originally recruited Benkert when he was the head coach at ECU. He tabbed Benkert as the heir apparent to record-setter Shane Carden before the Pirates fired him.

A quarterback with some mobility would be a much closer match to what Mendenhall used at BYU. That means if an improved offensive line boosted by three grad transfers can keep Benkert healthy, it’s not crazy to think both the quarterback and offense as a whole could make significant gains.