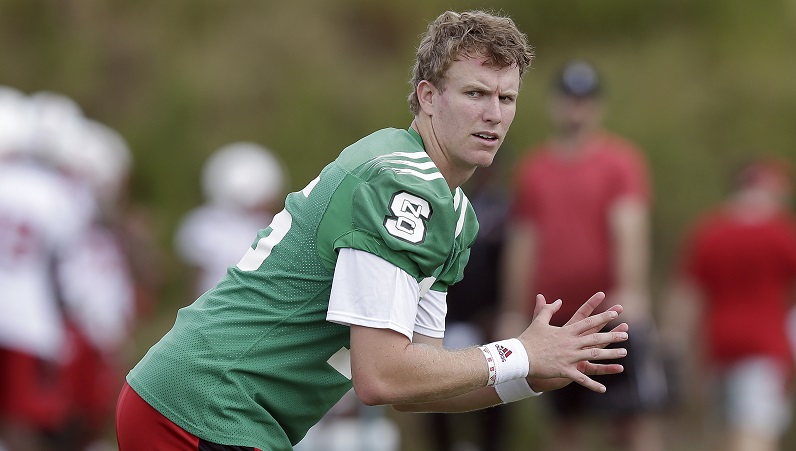 There is high optimism at NC State this season for various reasons, chiefly centered around a combination of 11 returning senior starters and a vaunted defensive line loaded with potential NFL talent.

Perhaps lost in the scuffle a little bit is the return of NC State junior quarterback Ryan Finley.

Finley had a solid first season for the Pack. He completed 243 of 402 passes (60.4 percent) for 3,059 yards and 18 touchdowns with eight picks. His 135.16 passing efficiency rating was seventh-best in school history for a single season.

However, there was a clear divide in how well Finley did against teams with below and above-.500 records. Disregarding the Notre Dame contest played during Hurricane Matthew, against squads with losing records, Finley was phenomenal: completing 100 of 139 passes (71.9 percent) for 1,293 yards and 10 touchdowns with zero picks in five games.

Against foes with winning records (seven games), Finley completed 138 of 251 passes, or 55.0 percent, for 1,739 yards and eight touchdowns with eight picks. He was benched briefly at Louisville and had to play a complimentary role with classmate Jalan McClendon at UNC.

For NC State to make a jump this year, Finley needs to make a jump from being just average against the better teams to being at least good. He showed at times he could potentially do that. In a close home loss to Florida State, Finley was good: completing 25 of 41 passes for 304 yards and a score with one interception. So it is not inconceivable that Finley can make that jump.

To that end, Finley has gained 20 pounds in the offseason according to head coach Dave Doeren, checking in at 210 pounds after playing last season around 190. He should also be more comfortable after spending a year with his teammates.

Doeren and others have reminded observers that Finley had only been in Raleigh a few months and was competing with McClendon, a very popular teammate, for the starting job at the most scrutinized position on the roster. That’s a challenging environment, and Finley, a native of Phoenix, Ariz., who transferred in from Boise State, also had to adjust to the cultural change of college football in the South.

A year later, and Finley appears much more at ease with his teammates and engrained in the fabric and culture of Wolfpack football, Doeren and others have noted. Between a higher comfort level in his surroundings and a stronger frame, Finley could be positioned to make that jump against the better competition NC State will face.