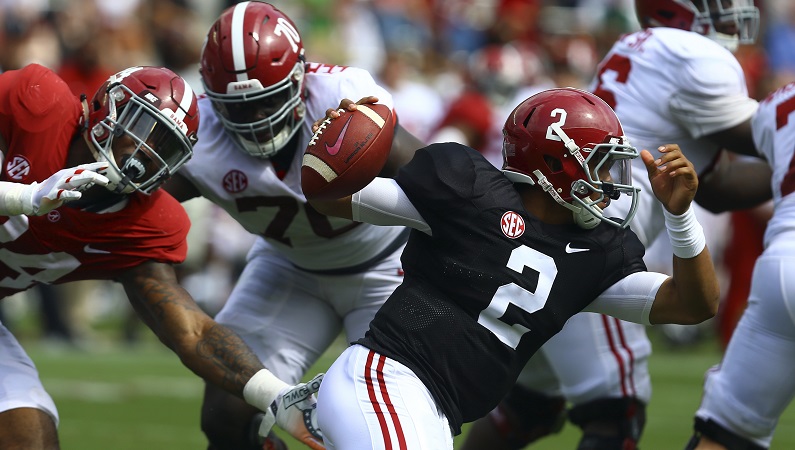 White quarterback Jalen Hurts (2) scrambles away from pressure during the second half of an NCAA college football Alabama spring game, Saturday, April 21, 2018, in Tuscaloosa, Ala. (AP Photo/Butch Dill)

Rumors are rampant throughout SEC country that Alabama starting quarterback Jalen Hurts is considering transferring from the Crimson Tide. It’s a remarkable turn of events for the defending national champions – a quarterback with a 26-2 career record possibly losing his job to 5-star phenom Tua Tagovailoa.

Tagovailoa heroically took the reins in the second half of the College Football Playoff National Championship against Georgia, leading the Tide to a comeback victory.

Hurts reportedly struggled in the Alabama spring game, completing barely half his passes. But Tagovailoa was unable to play in the spring game because of a hand injury. So the Tide coaching staff couldn’t get a proper cross-evaluation of the two.

Hurts has a tough decision to make in the coming weeks.

Should he return to Alabama, where he may be supplanted as starting quarterback and be relegated to bench warmer?

Or should he go elsewhere, where he’ll have to sit out the 2018 season and try to win the starting job in 2019?

Should Hurts elect to transfer out of Tuscaloosa, he’ll become one of the more desired college quarterback transfers ever. His pedigree as a national championship quarterback, along with his scrambling ability and his poise, will be highly desirable.

It’s more likely than not that Jalen Hurts won’t be playing in the ACC. But one possible match for Hurts in the ACC is Louisville. Everyone saw what Lamar Jackson was able to do in Bobby Petrino’s offensive scheme in 2016 and 2017. The Cards are preparing to work in Jawon Pass, a third-year sophomore with minimal experience, as their starter in 2018. If Pass struggles this fall, Hurts might be able to come in, should he choose U of L, and challenge in 2019 to be the starter.

Clemson is loaded at quarterback, so the Tigers won’t be an option for Hurts. Florida State’s Willie Taggart has James Blackman and Deondre Francois to choose from. But with Francois coming off an injury and facing legal issues, his status is unclear. If Francois winds up leaving FSU, the Seminoles would be a more attractive transfer destination. But the timing doesn’t make it likely that Hurts will wind up in Tallahassee.

Although they’re not a full-fledged ACC member in football, Notre Dame could play a potential role in Hurts’ decision as well if he elects to transfer.

Head coach Brian Kelly recruited Hurts in high school. But the Fighting Irish have Brandon Wimbush, a similar dual-threat quarterback, poised to start in 2018. After sitting out the 2018 season as a transfer, Hurts would have to fight it out in the spring and summer of 2019 with Wimbush for the starting role. So if Hurts is looking for a place where he won’t have to fight for the starting job, South Bend may not be the right fit.

Read more: Which ACC athletic director makes the most money?