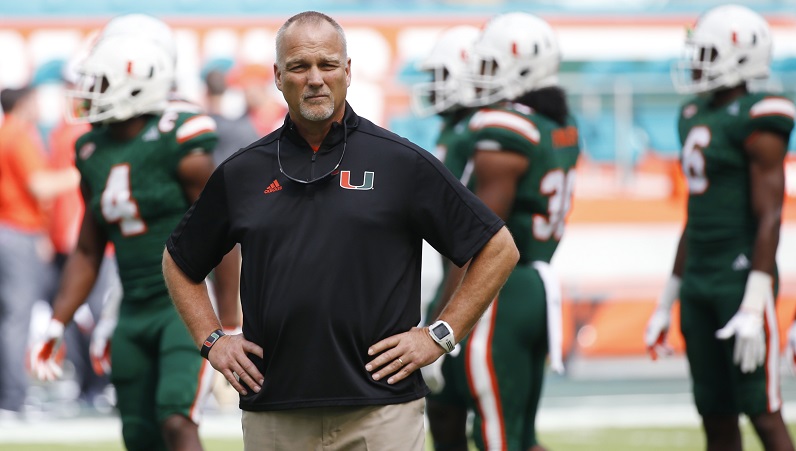 Four ACC teams are on a collision course for a showdown Nov. 4 with berths in the ACC Championship Game on the line. Miami, Virginia Tech, NC State, and Clemson have emerged as the league’s preeminent contenders for the ACC title and a berth in the College Football Playoff.

NC State, fresh off a bye week, travels to Notre Dame Saturday in a huge national matchup. The resurgent Wolfpack have had extra time to prepare for the Irish. But the film from Notre Dame’s blowout win over Southern Cal won’t be pleasant to break down. The Notre Dame game has zero bearing on NCSU’s hopes of winning the Atlantic Division. But a win could give the Wolfpack some clout in the CFP conversation.

On Nov. 4, the Wolfpack host Clemson in Raleigh. The winner of that game will hold the inside track to the Atlantic Division crown. Despite a loss at Syracuse, the Tigers will hold a critical tiebreaker over NCSU, unbeaten in league play so far, with a win.

NC State, on the other hand, will be in the driver’s seat in the Atlantic with a win over Clemson. They will have worked their way through the gauntlet of Louisville, Florida State, and Clemson 3-0. NCSU will have a two-game lead and tiebreakers over the field if they topple the Tigers.

Following a bye week after their stunning loss at Syracuse, Clemson hosts Georgia Tech Saturday in Death Valley. The Tigers have something to prove after having their 11-game winning streak snapped.

A Clemson loss to the Yellow Jackets would give NC State some breathing room. The Wolfpack could lose to the Tigers and remain in first place in the Atlantic, with one loss. But if Clemson beats both Georgia Tech and NC State, the Tigers will be back in position for a third straight ACC crown.

Miami and Virginia Tech are both heading into winnable Coastal Division games this weekend. The Canes travel to UNC, who hasn’t yet won an ACC game this fall, while the Hokies host Duke. In the likelihood that Miami and Virginia Tech knock off the Tar Heels and Blue Devils, they’ll face off Nov. 4 in Miami for the Coastal title.

Miami is back in the national championship conversation after a 6-0 start. The Canes still have to play Virginia Tech and Notre Dame. But wins in those two contests will position UM for an undefeated regular season. Although Virginia Tech lost to Clemson, the Hokies haven’t lost any other games, and can forge their way back to the top of the ACC Coastal with a victory over Miami.

Unlike the past three seasons, when the ACC champion had a clear path to the College Football Playoff, this year’s situation is more confused. Only Miami remains undefeated. Each of the other four Power 5 conferences have undefeated teams (Alabama, Penn State, Georgia, TCU, Wisconsin). While the Canes control their destiny, the other ACC teams need a little help – namely losses by a couple of those undefeated schools ahead of them – to get back in the CFP picture.

Semi-final Saturday on Nov. 4 will not only set up in the ACC Championship Game. It will help determine which ACC schools have a chance to play for a national championship come January. The two survivors will play in December with much more than a league title at stake.