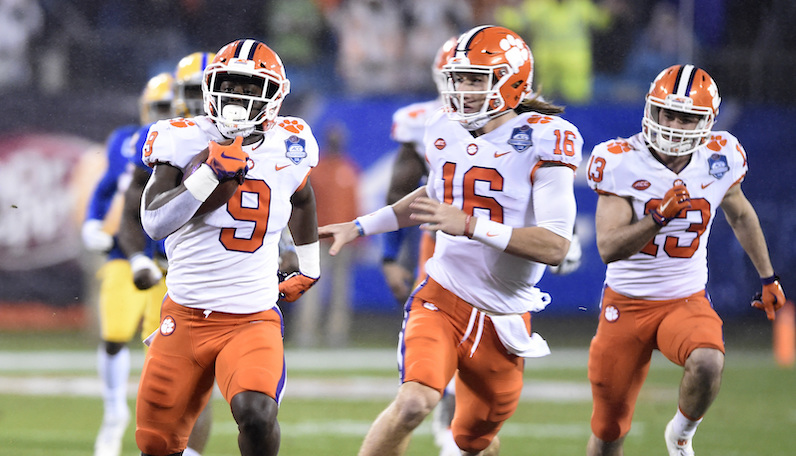 Clemson's Travis Etienne (9) followed by quarterback Trevor Lawrence (16) runs for a touchdown against Pittsburgh in the first half of the ACC Football Championship game in Charlotte, N.C. Clemson’s high-octane offense is led by the pair of young, talented offensive players. (AP Photo/Mike McCarn, File)

There’s been much discussion on the topic of getting a season off the ground in 2020, with COVID-19 still raging across America. The ACC, for weeks now, has viewed the end of July as somewhat of a deadline to have a final decision.

It’s understood that the league would like to (somehow) play a 2020 football season; if so, the ACC wants to go with an 11-game scheduling model. This is composed of 10 conference games and one out-of-conference matchup. Under this scenario, Notre Dame would join the ACC a full-time member for the 2020 football season.

(Some have mocked the inclusion of Notre Dame as league member for football in 2020. But it’d be a mutually beneficial move. Notre Dame would gain some scheduling security, while the league would enjoy added media rights money and interest at a time when college sports have never been pressed harder financially.)

However, there’s been back and forth this week; various reports have trickled out that the league’s presidents and chancellors will or won’t make a final decision this week. Initially there was some belief that a vote would take place on Wednesday, which may still happen, but isn’t a certainty.

The league’s preferred scheduling model would start in mid-September (Sept. 12). Teel noted that there won’t be a Week Zero for ACC teams this year. Earlier this week, Oklahoma made headlines when the Sooners elected to move up their 2020 opener against Missouri State one week — to Aug. 29.

According to Teel, in his interview with Hamilton, the ACC’s executive board was on a Zoom call this morning/afternoon. (Teel described trying to predict the outcome of 15 different president’s as “a fool’s errand.”)

To further highlight the challenges that come with these decisions, the New York Times published a piece on Wednesday after surveying every four-year public and private college competes in Division I sports. Not all schools responded to the Times; however, the finding are awing. According to the Times research, 6,300 cases of coronavirus can be tied to around 270 colleges since the start of the COVID-19 pandemic.

It’s important to note: that 6,300 number undersells the total figure. For instance, LSU didn’t respond to the survey, yet (at least) 30 players tested positive for COVID in late June.