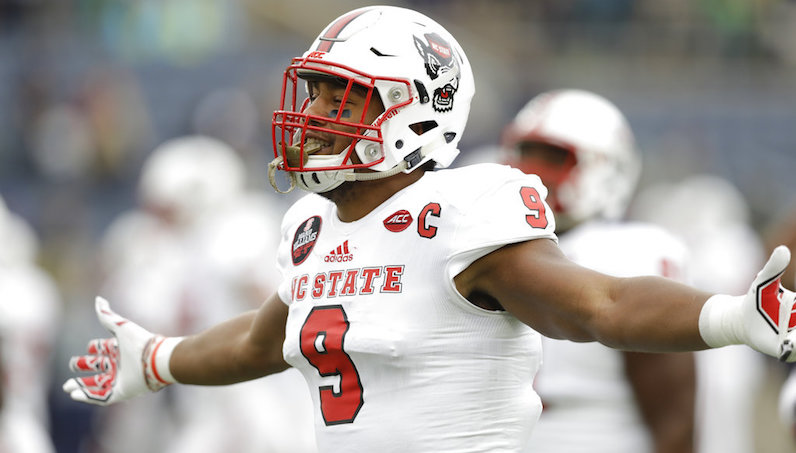 The Atlantic Coast Conference Football Players of the Week have been recognized following their performances in week 11 of the 2017 season.

In earning his second ACC weekly accolade of the season, Wolford totaled a career-high 499 yards of total offense in leading Wake Forest to a 64-43 win at Syracuse on Saturday. Wolford completed 25 of 38 passes for 363 yards and three touchdowns while posting an efficiency rating of 172.1. Wolford rushed 19 times for a career-high 136 yards and three touchdowns, scoring on runs of three, nine and 29 yards. He accounted for six total touchdowns, tying the school record he matched on Oct. 28 against Louisville. During Wake Forest’s second-half comeback (the Deacons trailed 38-24 at the half and 43-40 entering the fourth quarter), Wolford completed 12 of 18 passes for 156 yards and two touchdowns while rushing 10 times for 91 yards and a pair of scores.

Donaldson made the sixth start of his career in Saturday night’s 41-8 win over No. 3 Notre Dame and helped lead the Hurricanes’ offense to a 374-261 advantage in total yardage. Miami quarterback Malik Rosier was not sacked by the Fighting Irish, while Donaldson and the Hurricanes piled up 237 rushing yards in the victory.

Serigne caught seven passes for 119 yards and three touchdowns against Syracuse. Serigne caught scoring passes of 31, 19 and six yards in the 64-43 victory. In addition, Serigne had four receptions that went for first downs. Serigne’s 152 career catches for 1,912 yards are both ACC records for a tight end, and his 20 career touchdown catches tie former Virginia Tech standout Bucky Hodges and Virginia star Heath Miller for the most by a conference player at that position.

After missing the majority of the past four games due to injury, Mitchell returned to the lineup and led Georgia Tech with nine tackles in a 28-22 win over No. 17 Virginia Tech. Mitchell’s nine stops included a sack and 1.5 tackles for loss, and he also broke up a pass. Mitchell led a defensive effort that limited the Hokies to 16 offensive points and 258 yards, well below their season averages of 32.6 points and 430.1 yards per game entering the contest.

McCloud came through with a big performance for the Hurricanes on the defensive side of the ball, helping shut down Notre Dame All-American running back Josh Adams and limiting the Fighting Irish offense in a 41-8 win. McCloud posted five tackles, recorded one sack (three yards) and finished with 1.5 tackles for loss. He added one quarterback hurry in a dominant defensive performance for Miami, who held Notre Dame to just 261 total yards and 109 rushing yards.

Johnson repeated as the ACC Defensive Back of the Week and earned Walter Camp National Defensive Player of the Week accolades after another standout performance as Miami topped Notre Dame, 41-8, at Hard Rock Stadium Saturday night. Johnson led all Hurricanes with eight tackles (four solo) and wore the program’s “turnover chain” yet again, this time on an interception of Notre Dame quarterback Brandon Wimbush early in the game. Johnson added one tackle for loss and broke up a pass. Johnson leads all Hurricanes with 66 tackles this season and has started every game. He ranks second on Miami’s team with three interceptions.

Ratliff-Williams was named the ACC Specialist of the Week for the second time this season following his role in last Thursday night’s 34-31 win at Pitt. Ratliff-Williams became just the fourth player in school history to return two kickoffs for touchdowns in a single season with a 98-yard touchdown on the opening kickoff. Ratliff-Williams, who also threw for a score and caught a touchdown pass in the game, now has as many kickoff return touchdowns on the year as the rest of the ACC combined.

Etienne was recognized as the ACC Rookie of the Week for the second time after he rushed 14 times for 97 yards and two scores in Clemson’s 31-14 win over Florida State. He added a 16-yard reception and 45 yards in kickoff returns for a team best 159 all-purpose yards. Etienne scored Clemson’s second touchdown of the day in the second quarter on a 28-yard burst up the middle, then had a one-yard run in the fourth period that gave Clemson a 24-14 lead with three minutes left.