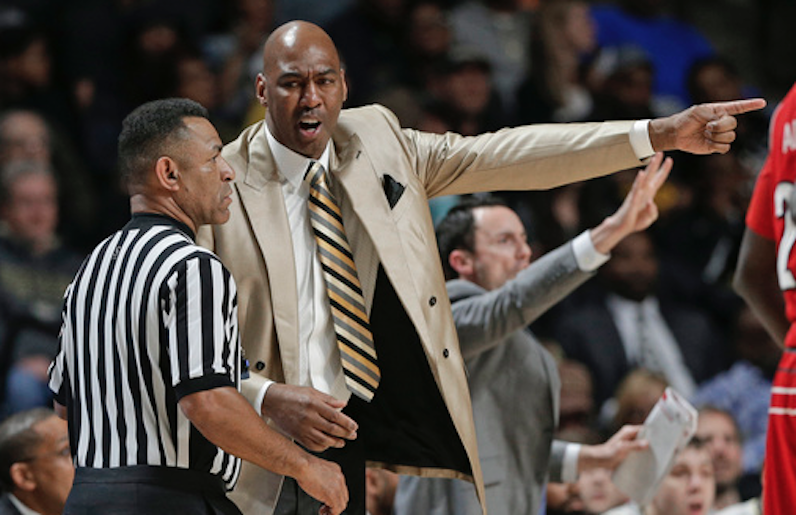 In 2009, Gaudio put the Deacons at No. 1 for a week during the season with a team that featured four future NBA players (Jeff Teague, James Johnson, Ish Smith and Al-Farouq Aminu). The 2010 team featured Smith and Aminu, as well as fan favorites C.J. Harris and L.D. Williams.

Overall, the program had reached a postseason tournament in 17 of the last 19 seasons. It was a fun time to be part of Tie Dye Nation. No one could have imagined the fall that was coming.

Gaudio’s team lost its next four games, slid by Clemson in the season finale, only be blown out 83-62 by No. 12 seed Miami in the ACC Tournament. After an overtime win against Texas in the NCAA tournament, the Deacons lost by 30 to Kentucky.

Four springs later, Danny Manning took the Wake Forest job, which looked incredibly different. Manning now had to take on the challenge of pulling the Deacons out of the bottom of the ACC — a league that had added Louisville, Notre Dame, Syracuse and Pittsburgh. He had to restore support from a fanbase that very publicly called for the heads of coach Jeff Bzdelik and Wellman.

In his third season, Manning has the Deacons in the NCAA tournament mix and has returned fans to the seats of Joel Coliseum. Donations are changing the facilities, including a recent $5 million gift. Wellman couldn’t have asked for anything better.

Manning has already accomplished many things that haven’t happened at Wake Forest since 2010, namely a 19-win season and a .500 record in the ACC. He’s almost assured to add a postseason bid of some kind to that list.

The 50-year-old is also making progress in other areas; coming into this season, the Deacons had lost 46 of their last 49 games against ACC teams on road or neutral courts. The Deacons have gone 4-7 in those situations so far this year.

Meanwhile, Manning’s reputation as a coach continues to grow. Although he made the NCAA tournament in his second season with Tulsa, his lack of experience left the door open for questions.

Now, Manning has cemented his reputation as a big-man coach with the development of John Collins, who has gone from outlier prospect to potential NBA lottery pick in two seasons. Manning is on the national radar, just being named an assistant coach for the Under-19 U.S. National Team this summer under John Calipari. All of these developments should help on the recruiting trail.

Interestingly, Manning’s success came in the opposite way of what he predicted. While he said that Wake Forest would hang its hat on defense, it’s been an offensive surge that’s made the program competitive again.

Manning has recruited for the modern game, with a team that can now spread the floor. The offense improved from averaging 69 points per game in his first season to 83 PPG this season. The Deacons move the ball crisply and fire away from three-point range — elements severely lacking in previous years.

But to truly become a factor in the ACC, Manning will have to fix the defense. The Deacons have been among the ACC’s worst during his tenure, and that was on full display as they were bounced from the ACC Tournament by Virginia Tech despite scoring 90 points, giving up 99.

Manning’s ability to land big-time talent is still a bit of an unknown. While he’s missed on a number of top prospects, including Harry Giles in the 2016 class, he’s added Crawford and Doral Moore, both highly ranked. Next year’s class features a top-35 prospect in wing Chaundee Brown.

Manning and his staff have proven to be creative, adding graduate transfers like Austin Arians and Darius Leonard, international player Dinos Mitoglou and transfer Keyshawn Woods.

While he’s developed Collins, Mitchell Wilbekin and Brandon Childress into productive players, Manning’s hope for future success may depend on his ability to do that for several more players on the roster.

Three players in the 2016 recruiting class have barely played this season: Rich Washington, Donovan Mitchell and Sam Japhet-Mathias. In addition, Moore appeared to regress late in the season; he didn’t play at all in some games.

If Collins leaves, Manning will need capable contributions from that group, especially the bigger players: Moore, Japhet-Mathias and Mitchell. By the following season, after Mitoglou leaves, he’ll really need that group to step up.

In the meantime, more creativity will be required, especially if Collins leaves. Can the coaches land a productive grad transfer for next season, or perhaps international big man Olivier Sarr?

Manning also must use this season’s success to convince top recruits in the 2018 class to join the Deacons. Wake Forest currently has offers out to at least 14 of the top 50 prospects. To build a foundation for the next level, Manning needs to turn some of those offers into commitments.

Whether an NCAA bid comes on Sunday or not, Manning has the Deacons headed in the right direction.

Quite a far cry from the situation he inherited three years ago.