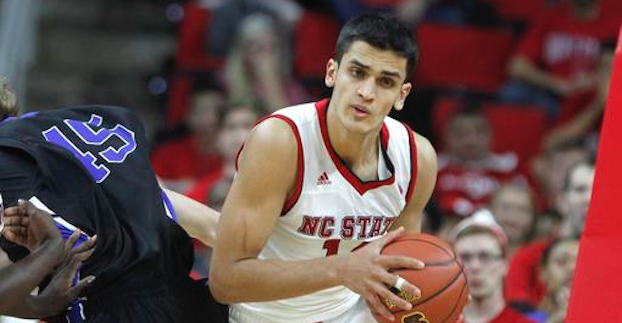 Omer Yurtseven will be back at NC State for his sophomore season. (AP Photo)

The wait is over for NC State freshman center Omer Yurtseven. The Turkey native will suit up for the first time Thursday evening when the Pack hosts Appalachian State. He had to miss the first nine games of the season due to an NCAA suspension over eligibility issues.

NC State’s biggest need right now is shoring up a defensive mentality that has struggled to take hold through the nonconference slate. The Pack showed glimpses of improvement in that regard during a needed overtime win over Tennessee State, which is expected to be a strong contender for the Ohio Valley Conference championship this year.

The Pack’s matchup zone in the second half helped hold the Tigers scoreless for eight minutes while NCSU erased an eight-point deficit. The question is, was that a one-game aberration or a sign of things to come?

Yurtseven may not necessarily be the answer to those problems. The first two weaknesses listed under his video scouting report by DraftExpress were: “Defensive Impact” and “Toughness.”

What he will add to NC State, according to the same website, is mobility with his size (7-0, 245 lbs) and skill on offense, which is something NC State could also use even if scoring has not been a significant problem. The starting perimeter lineup of freshman Dennis Smith, sophomore Torin Dorn and senior Terry Henderson is averaging a combined 52.3 points per game, or 65.7 percent of the team’s 79.6 points.

Junior forward Abdul-Malik Abu has shown improvement in his shot, making an impressive 75.6 percent of his free throws and shooting 53.5 percent overall. Abu, however, still struggles with consistency, and the Pack cannot expect major offensive scoring production from freshman Ted Kapita and senior BeeJay Anya on a nightly basis.

Yurtseven has the potential to loosen some of the offensive burden on the perimeter. He also gives coach Mark Gottfried some depth relief with his big men, who have battled foul trouble in games this year. With four post players in the rotation, Gottfried can breath a little easier in that regard.