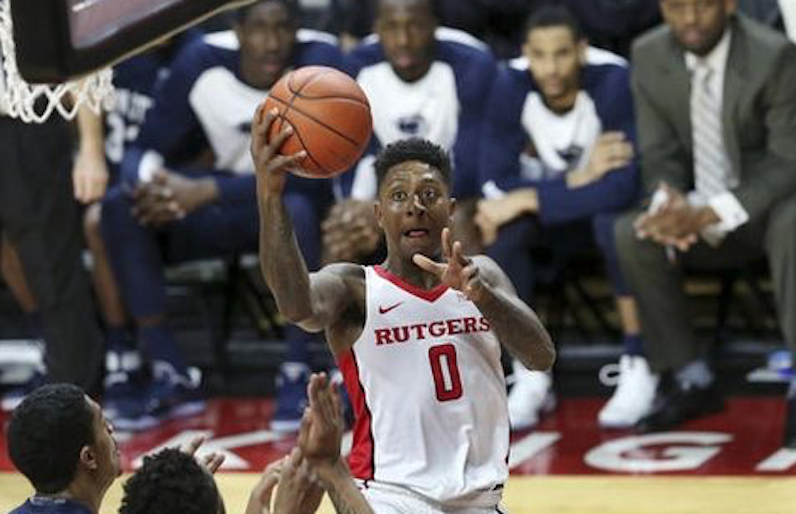 Rutgers transfer Nigel Johnson committed to Virginia on a visit to Charlottesville over the weekend. The 6-1 guard’s decision helps the Cavaliers regain some of the backcourt talent lost when Marial Shayok and Darius Thompson announced shortly after the season they would transfer.

Johnson will graduate from Rutgers this spring and has one year of eligibility; he’ll be able to play immediately.

Johnson’s career path is reminiscent of Syracuse guard Andrew White, who started his career at Kansas and transferred to Nebraska before taking the grad transfer route to the ACC.

Like White, Johnson started out in the Big 12 at Kansas State before heading to the Big Ten. At Rutgers, he averaged 11.3 points per game. He’ll add much needed scoring to the Cavaliers’ backcourt.

Some of Johnson’s best games at Rutgers came against the best competition.

Johnson scored a season-high 23 points at Purdue in February, shooting 5-of-6 from three-point range. He also scored 16 points against Seton Hall, had 14 points and seven rebounds in an overtime loss to Wisconsin and averaged 21 PPG in two Big Ten Tournament games.

Going back to his sophomore season at Kansas State, Johnson averaged just five points per game. He did, however, post 14 points, five rebounds and five assists against a ranked West Virginia team. He also had 17 points, nine rebounds and four assists in an upset of then-No. 12 Iowa State. In addition, he hit four of five three-point attempts when the Wildcats knocked off Kansas.

Perhaps Tony Bennett can help Johnson develop more consistency on offense. At the very least, the Cavaliers are adding an experienced player with the ability to hit from long range.

Given Virginia’s periodic struggles on offense last season, Johnson is a quality pickup, considering the Cavs had scholarships to spare.

Now it will be interesting to see if Virginia goes the transfer route again to try to boost post scoring. Bennett will count on continued offensive development from Mamadi Diakite and Isaiah Wilkins, while adding soft shooting redshirt freshman Jay Huff. However, the team could also use an immediate-impact scorer down low.

Projecting UVA’s rotation for the 2017-18 season