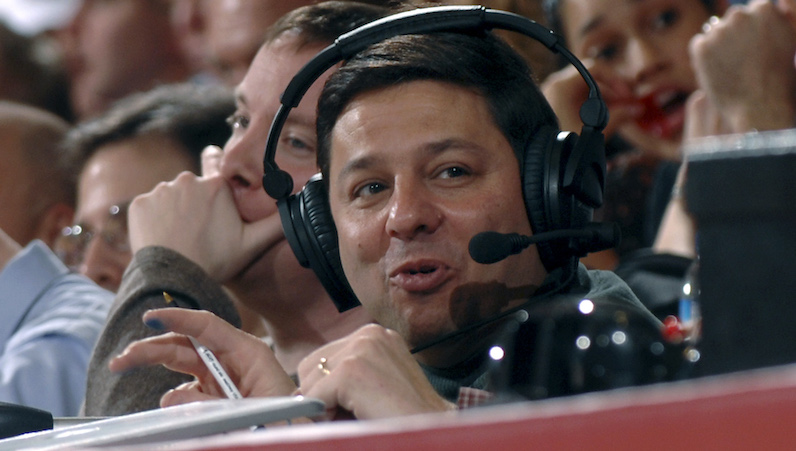 Joe Lunardi, known as "The Bracketologist," sits courtside during the men's basketball game between Saint Joseph's University and Duquense in Philadelphia, Jan. 3, 2007. Coaches lobby Lunardi, players stop by to schmooze and fans write nasty letters when their team doesn't get the seed they feel it deserves in the NCAA tournament bracket . (AP Photo/Greg Carroccio)

With the NCAA Tournament starting in less than two weeks, ESPN Bracketologist Joe Lunardi joined The David Glenn Show to talk brackets and postseason hopes. Lunardi and DG discuss NC State’s resume (why the team’s NET ranking could be problematic) and the challenging nature of evaluating the ACC this season.

Generally speaking, good wins help more than bad losses hurt. There’s no metric for this. It’s just my experience and the experience of others who have been doing this for while. It makes sense if you think about it because what we’re essentially measuring there is upside. You want teams that can not just be in the tournament, but win in the tournament. That’s kind of the whole point. I believe NC State has proven that. I’m not really factoring in the ‘Bad Losses’ in terms of a breakdown of their record in the various quadrants, but it’s hurting their NET ranking to some degree. Had they been about to pull off the season sweep of Duke, let’s say, that would be a different story.

Lunardi also mentioned that if NC State is to make the tournament, the wins over Duke and Wisconsin will prove to be crucial.

I don't want people to think I'm taking pleasure in listing them in the "First 4 Out" in consecutive years, but it's just where they happen to fall. Their NET was in the low 30's last year. This year, their NET is in the high 50's.

*Note: This interview was recorded before games on March 4

Click to listen to the full interview with Joe Lunardi