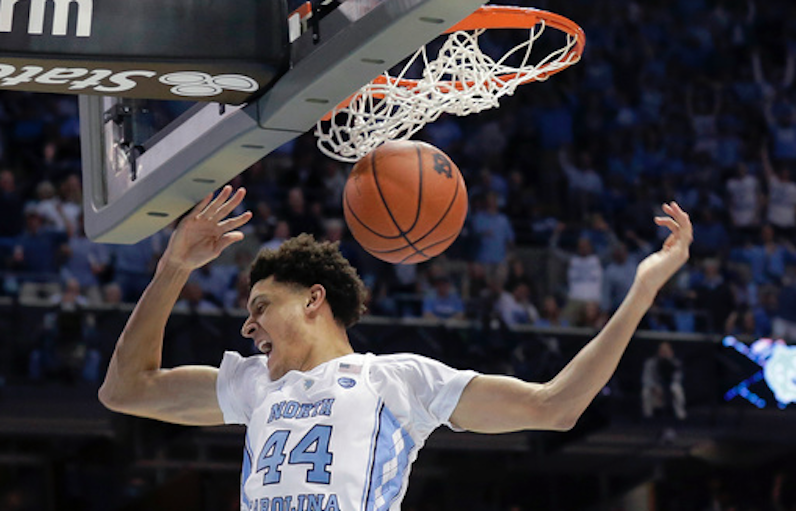 Justin Jackson is the 2017 ACC Player of the Year. (AP Photo)

Jackson, a junior from Tomball, Texas, was the choice of 24 members of the voting panel (15 ACC head coaches, selected media) that cast ballots for this year’s postseason honors. Wake Forest’s John Collins placed second with 15 votes.

Jackson and Collins are joined on the All-ACC first team by Duke sophomore Luke Kennard, Notre Dame junior Bonzie Colson and Louisville sophomore Donovan Mitchell. Jackson, Kennard and Colson are also among the 15 college players that were named to the John R. Wooden Award national ballot on Saturday.

The 6-foot-8 Jackson is seventh among ACC scorers at 18.3 points per game, and his 85 field goals from 3-point range rank second in the conference.  Jackson also averaged 4.7 rebounds and 2.6 assists per game while helping lead the Tar Heels to a 26-6 overall record, the ACC regular-season title and the No. 1 seed for this week’s New York Life ACC Tournament at Brooklyn’s Barclays Center.

Duke’s Kennard is the only unanimous selection to this year’s All-ACC first team and leads the conference in scoring at 20.1 points per game. The Franklin, Ohio, sophomore ranks second among ACC players in 3-point field goal percentage (.450), sixth in overall field goals percentage (.504) and fourth in free-throw percentage (.847). He has scored in double figures in 30 of Duke’s 31 game, eclipsing the 20-point mark a team-high 16 times and registering three games of 30-or-more points.

Wake Forest’s Collins leads the ACC in field goal percentage (.623), ranks third among conference scorers with 19.1 points per game and is second in rebounding with 9.8 per contest. After averaging 7.3 points and 3.9 rebounds while starting one game as a freshman in 2015-16, Collins is a major reason the Demon Deacons (18-12) enter this year’s New York Life ACC Tournament on a high note and with a strong case for NCAA Tournament consideration. The West Palm Beach, Florida, sophomore has been a model of consistency, scoring 20-or-more points in 12 consecutive games late in the season – tops in the ACC this year and the most at Wake Forest in more than four decades. He has posted double-doubles in 15 games.

Notre Dame’s Colson leads all ACC players with 18 double-doubles this season, including 10 in conference play. The 6-foot-5 junior from New Bedford, Massachusetts, leads the league in rebounding at 10.4 per game and is the 10th leading scorer at 17.0 points per game. In leading the Fighting Irish to a 23-8 overall mark and a No. 3 ACC Tournament seed, Colson has posted seven 20-point, 10-rebound performances this year. All seven of those performances have come against Power 5 conference teams, including four ACC opponents.

Louisville’s Mitchell averages 15.9 points per game while leading the ACC in steals with 2.13 per outing, and the sophomore has been at his best during the stretch run of the regular season. Over the last 18 games, Mitchell is averaging 19.2 points per game and has made 55-of-132 3-point field goal attempts (.417). He has scored in double figures 23 times this season. The Greenwich, Connecticut, native has scored at least 16 points in 10 of his last 11 games and has nine 20-point games this season.

After being overwhelmingly chosen as the ACC preseason Freshman of the Year by the league’s media members last October, NC State’s Smith met expectations by ranking fifth among ACC scorers with 18.5 points per game and leading the league in assists with 6.3 per contest. Smith has also registered 60 steals in 31 games (1.94 per game), second among ACC players in that category. The Fayetteville, North Carolina, native became the only player in conference history to register two triple-doubles in the same season and has scored at least 30 points in an ACC-best four games.

Georgia Tech’s Pastner, who won 167 games in his seven seasons at head coach at Memphis, was chosen the ACC Coach of the Year in his first year with the Yellow Jackets. Georgia Tech began the season having lost its top four scorers from the last season’s squad that tied for 11th place in the ACC and was tabbed for a next-to-last finish in the league’s preseason media poll. Instead, Pastner’s team will open play in the ACC Tournament on Tuesday following a 17-win regular season that includes victories over nationally-ranked conference opponents North Carolina, Florida State and Notre Dame.

Virginia Tech’s Allen has come off the bench in 24 of the 29 games in which he has appeared, averaging 13.1 points, 3.3 assists and 2.3 rebounds while playing close to 29 minutes per contest. The redshirt senior from Woodbridge, Virginia, has scored in double-figures 21 times and enters the New York Life ACC Tournament with 20-or-more points in three of his last seven games. Allen played pivotal roles in both Virginia Tech’s one-point wins over Clemson with a big steal and a 3-pointer in the final 1:31 in a road win Jan. 22 and the game-winning shot with 3.8 seconds left at Blacksburg on Feb. 21.

Georgia Tech’s Lammers leads the ACC and ranks third nationally with 3.32 blocked shots per game (103 in 31 games). The 6-foot-10 native of San Antonio, Texas, is third among ACC rebounders, with over two-thirds of his 284 total rebounds coming at the defensive end. Lammers has also been a reliable inside defender for the Yellow Jackets, who have limited their opponents to a collective .398 shooting percentage from the floor and 67 points per game.

ACC PLAYER OF THE YEAR

ACC COACH OF THE YEAR

ACC DEFENSIVE PLAYER OF THE YEAR

ACC SIXTH MAN OF THE YEAR