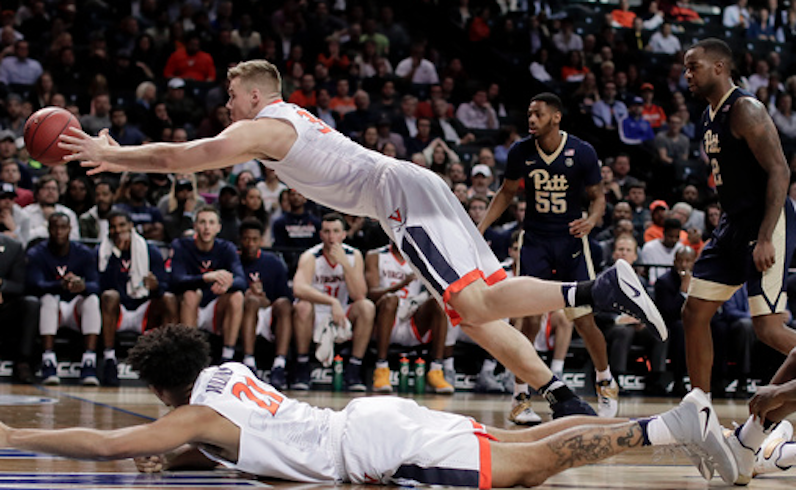 Jack Salt might be the Virginia starter least likely to wind up on the One Shining Moment highlight reel at the end of the NCAA Tournament.

The 6-11 redshirt sophomore from New Zealand may have the look and name of an action star. However, he hardly does anything flashy on the court.

Yet despite averaging just 3.6 points and 3.9 rebounds per game, Salt has started every game this season. He is one of UVA’s most important players entering Thursday’s NCAA Tournament opener against UNC Wilmington.

“Jack is such a rugged player,” Virginia coach Tony Bennett said earlier this week. “He does a lot of things you don’t see in the stat sheet. If you take the whole thing, his pluses are usually bigger than his minuses.”

Salt has notched double figures scoring just one this season — 10 points against Robert Morris in December. But Bennett detailed how Salt is a key contributor for the Cavs on offense.

“There will be some things in a game or practice that you watch and say ‘oof, that didn’t look great,’” Bennett said. “But you got to judge him on his whole body of work. He’ll get an offensive rebound and tip one or two in. He got that guy about three shots because he screened well.”

So while no Virginia player is exactly stuffing the stat sheet — you might have heard London Perrantes is the only Cavalier averaging double figures — having Salt on the floor can actually mean the difference between UVA getting good looks within the flow of the offense or the Wahoo guards resorting to forced shots.

But that’s the rub. Whether it’s a matter of matchups or foul trouble, Bennett doesn’t always feel comfortable keeping Salt on the floor for extended periods. The big man has played 15 minutes or fewer in half of Virginia’s 10 losses.

On the flip side, the Cavs are 9-2 when Salt plays at least 20 minutes. One of those losses was a buzzer-beating heartbreaker at No. 1 Villanova.

How well Virginia utilizes Salt’s under-the-radar abilities might be the key to avoiding the dreaded 12-over-5 upset. UNCW features a guard-heavy lineup and will want to push the pace. Often over the past two seasons, that recipe has called for more than a pinch of Salt on the bench.

UNCW’s top post player, Devontae Cacock, is a super athletic 6-7 slasher. All-ACC Defensive Team pick Isaiah Wilkins is the ideal Cavalier for matching up with Cacock, who is shooting an unreal 80 percent from the field. But Wilkins has battled an illness all March, and it’s unclear if he’s entering the tournament at full strength.

All the more reason finding a way to utilize Salt could be the answer for Virginia to make a run.