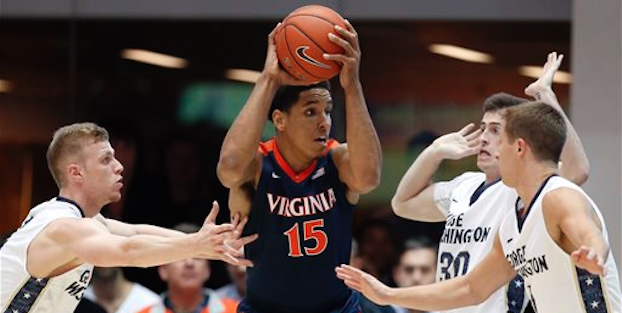 Will Malcolm Brogdon be Virginia's third NBA Draft product in as many years? (AP Photo)

After producing only two NBA Draft picks from 1996-2011, Virginia has had a player taken in three of the last four drafts and will likely have another one selected this year.

With the 2016 NBA Draft set for June 23, Malcolm Brogdon is in position to become the third Cavalier to hear his name called in the last three years.

But where will he be taken?

Brogdon is projected by DraftExpress to be taken in the second round at No. 44 overall. He’s listed a little higher in nbadraft.net’s most recent mock draft, where he’s predicted to go No. 41 overall. In CBS Sports’ latest mock, which only included first-round projections, Brogdon was not listed.

Brogdon was among the most productive players in the ACC last season, averaging 18.2 points per game and hitting 39.1 percent of his three-pointers. As a senior, he was named both ACC Player of the Year and ACC Defensive Player of the Year, and he was a consensus first-team All-American.

While the Atlanta native was at UVa for five years — he redshirted the 2012-13 season while recovering from a foot injury — it’s far from unheard of for a senior out of the ACC to go in the first round. A year ago, Notre Dame guard Jerian Grant was selected No. 19 overall after playing five years with the Irish.