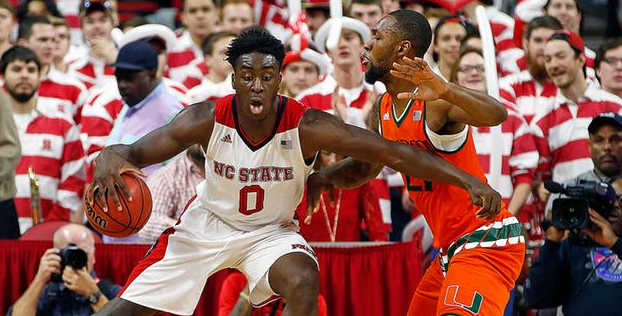 Much to the discussion surrounding NC State basketball heading into this season has centered on two main topics: the elite talent of freshman point guard Dennis Smith Jr. and the eligibility of two freshmen frontcourt players — Omer Yurtseven and Ted Kapita — which is still up in the air. There’s more to this team than those two storylines, though. It’s not that he’s been forgotten, but it’s worth pointing out: if the Wolfpack are to make it back to the NCAA Tournament, junior forward Abdul-Malik Abu will have to be their second best player. He’s also the most likely to benefit from playing with Smith, who is one of the best point guard recruits that Tobacco Road has seen in some time.

Abu’s entering his third season in Raleigh, but he’s already one of the Pack’s most seasoned players — only Beejay Anya and the redshirting Lennard Freeman have played in more games than the 6-8 junior. NC State slumped all of last season, despite receiving an All-ACC performance from point guard Cat Barber. The Wolfpack were labeled as a one-man team; however, that wasn’t really the case. Cat wasn’t necessarily on an island. Abu put together one of the better seasons in the ACC a year ago. As a sophomore, he averaged just under 13 points and nine rebounds per game. Abu scored double-figure points in 28 of State’s 33 games; he also recorded 14 double-doubles while shooting 49 percent from the field, which was good for eighth in the ACC.

He emerged as one of the best offensive rebounders in the conference. Abu averaged nearly 3.6 offensive boards per game, and netted an offensive rebounding rate of 13.3 percent — sixth best in the ACC. According to Ken Pomeroy, the Wolfpack scored 113 points per 100 possessions last season; Abu was the second best player on a team that ranked 33rd in the nation in offensive efficiency. After toying with the idea of turning pro following the 2016 season, Abu decided to return to Raleigh, which was a serious boon for Mark Gottfried.

As amazing as Barber was a season ago, Abu may also stand to benefit from playing with a pass-first point guard, Smith, for the first time since he stepped foot on campus. Draft stock rising or falling or whatever is so nebulous that it’s silly to me when people speak about it as if it were an exact science. That said, Abu with another year of seasoning — improved shooting range, free throw percentage and rim protection — will become a more legitimate NBA prospect. Playing alongside Smith will simplify the game for Abu, who he finishes above the rim with the best of them. Abu’s made 252 career field goals while at NC State, and 87 of them (34.5 percent) have been dunks.

A layup or dunk at the rim is the most efficient shot in basketball, especially on the college circuit where corner threes don’t share the same elevated value as those in the NBA. Abu should be on the receiving end of even more of these tasty opportunities this season from Smith. The Wolfpack also have more perimeter shooting this season, and that should improve their spacing. In 2015-16, State finished No. 161 in the nation in three point percentage (34.8 percent). This should mean fewer bodies and long limbs in the paint cutting off his airspace. Keep an eye on Abu’s shooting percentage this upcoming season; can he eclipse the 50 percent mark in 2016-17?

Last season, Abu attempted 154 free throws, which was 17th most in the ACC, but more trips to the line would do wonders for Abu’s overall efficiency, too. For the record, Abu posted a player efficiency rating of 21.9, according to Sports-Reference.com, which was also 17th best in the conference.

I’m curious to see how Abu functions as the second half of a pick-and-roll tandem with Smith. The Pack run that UCLA high post offense that looks pretty, and is good at freeing up cutters and shooters for quality looks. When things bog down, however, it’s nice to be able to rely on something more simple: spread the court, and let Smith and Abu go to work.

Yurtseven’s eligibility will obviously be something to monitor, too. NC State has improved depth this season, but if the five-star freshman has to miss a chunk of games, Abu will be counted on to play heavy minutes in the post. If and when Yurtseven returns, how will the two play together? Abu hasn’t shown much touch on his jumper, which means State would be trotting out a lineup without shooting range in their two big spots. However, if one of those two could function as a passer or facilitator at the elbow, then State could stay big, clean the offensive glass, and still not curtail all of their spacing.

KenPom has NC State ranked as the No. 36 team in the nation, based off of projected point differential. The Wolfpack clearly have the talent and firepower on offense to get the the NCAA Tournament for the fifth time in six seasons. Abu will play a major role in this postseason revival.