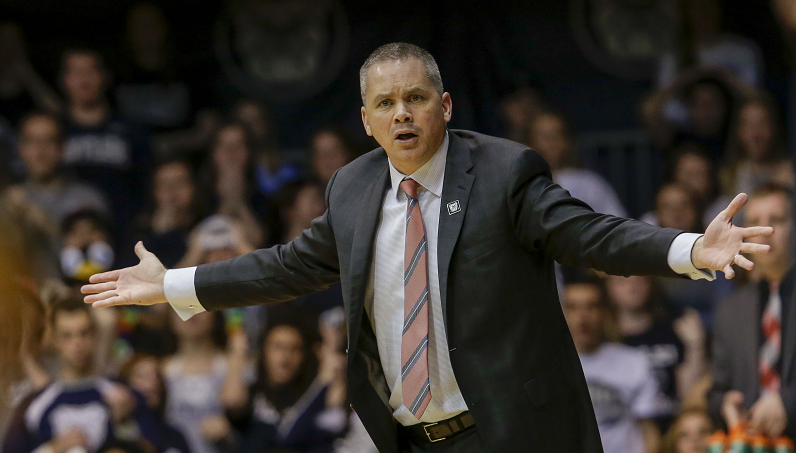 Chris Holtmann is in his third year as Butler's head coach. (AP Photo)

The coaching carousel silliness started early this year with NC State announcing the firing of head coach Mark Gottfried on Thursday. Gottfried will finish the season with the Wolfpack, but speculation on his potential replacement has already begun.

Actually, the speculation really fired up earlier this week.

A report surfaced Monday that a decision was made over the weekend to can Gottfried at season’s end and that NC State was putting out “preliminary feelers” to Dayton head coach and Wolfpack alum Archie Miller. An NCSU spokesman denied later that night that the school had reached out to any other coaches.

Well, three days and a 97-73 loss to UNC later, the search begins. Miller stated in a Thursday interview on NBC Sports Radio that he had not had contact with NC State, but at least gauging his interest somehow, some way seems like a no-brainer for the Wolfpack.

Despite the merits of the NC State job, Miller is unlikely to return to his alma mater this offseason. Radio host and ACCSports.com contributor David Glenn broke down those details on Wednesday.

So where does the Pack look next?

The most optimistic NC State fans might be hoping for Wichita State coach Gregg Marshall, but don’t count on it. Marshall is already cashing in with a Shockers program destined for its sixth consecutive NCAA tournament appearance; coaches don’t leave those types of situations for rebuilding jobs. Cincinnati’s Mick Cronin isn’t rolling in as much dough, but he’s at his alma mater enjoying plenty of success. Plus, he had enough drama last offseason.

Now that we’ve gotten that out of our systems, let’s really have fun with this. Here are five coaches who could find themselves on the Wolfpack bench next season:

Yeah, I know — not very creative. Keatts coaches just two hours east of Raleigh and is on the verge of leading UNCW to back-to-back Big Dance appearances. Pack fans had him on the radar even before Thursday.

Here’s the thing: Keatts checks many of the boxes for what would seem to be a perfect fit for NC State. He’s young, he quickly turned a struggling program into an NCAA tournament participant, he has in-state ties, and he’s been exposed to coaching at the major college level (Louisville assistant from 2011-14). Perhaps most importantly, Keatts can recruit.

The downside? This is Keatts’ third season as a Division I head coach, so the sample size is small. But maybe it’s time for the Wolfpack to take a chance. It’s impossible to blame NCSU for bypassing Marshall in 2006 (when he was an up-and-comer at Winthrop) or Miller in 2011 (when he’d never been a head coach), but you also don’t want to be late to the party.

Holtmann’s potential interest in NC State is unknown, as is the Wolfpack’s in Holtmann. However, the Indianapolis Star isn’t overlooking the possibility of a match.

Like Keatts, Holtmann has North Carolina connections — he rebuilt Gardner-Webb’s program in just three seasons (2010-13). The third-year Butler coach is winning both on the court and on the recruiting trail, and this wouldn’t be the first time a major program showed interest.

Even if Holtmann has a wandering eye, there’s no guarantee he’d end up in Raleigh. Tom Crean is in hot water just an hour down the road at Indiana, and the Hoosiers may soon make a coaching change.

Told you this would be fun.

Hoiberg is an out-of-left-field, outside-the-box name, but it might not be that far-fetched if the right pieces fall into place. Hear me out: Hoiberg has a proven track record in the college ranks, and the NBA thing isn’t working out so well. Sure, he’s making a boatload of money with Chicago right now, but his future with the Bulls is murky at best.

Hoiberg left a good situation at Iowa State two years ago, and a second chance might sound intriguing if he ends up back on the market. Gottfried showed it’s possible to attract talent to NC State by reeling in the likes of Dennis Smith Jr., Cat Barber, T.J. Warren and Rodney Purvis; Raleigh wouldn’t be the worst destination for someone looking to get back into the college game.

It’s easy to understand why a hire like this might draw lukewarm reviews. That being said, Muller is having the best season yet of his young head-coaching career. At just 40 years old, he might be only weeks away from leading Illinois State to its first NCAA tournament appearance since 1998.

Muller is an Illinois State grad, so he may be happy where he is. NC State is a clear step up, though, and it would also give Muller the chance to coach against his former boss at Vanderbilt, Kevin Stallings.

This comes with an “In Case of Emergency Break Glass” sign.

For multiple reasons, NC State probably doesn’t want to go down this road. A former Wolfpack star, Del Negro has been out of coaching for a few years. Kind of like Gottfried six years ago. Also, Del Negro’s coaching experience is limited to the pros. Kind of like Lowe 11 years ago.

Maybe that’s not fair to Del Negro, but it’s the reality. This would be a tough sell even with the nostalgia of the Jim Valvano era.

Del Negro’s name is worth bringing up because of his NCSU ties, but it stops there.