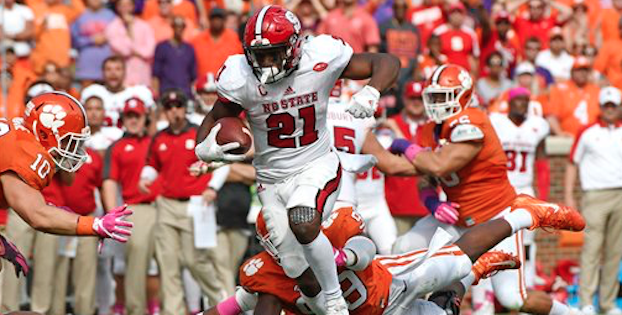 NC State running back Matt Dayes is expected to be available on Saturday against Boston College. (AP Photo)

There was little good that came out of NC State’s 54-13 loss at then-No. 7 Louisville last Saturday. But one potential concern appears to have been alleviated, and that is the status of star senior running back Matt Dayes.

Dayes took a blow to the head on the end of a 21-yard catch-and-run, and he was checked for a concussion afterward. Dayes did not return to the game, but according to head coach Dave Doeren, that was a coaches decision.

Doeren noted that Dayes had been cleared to come back into the contest, but circumstances negated the need to have him go back out.

“Matt is fine, and he’s feeling good,” Doeren said during his Monday press conference. “He wanted to go back in the game, and we didn’t feel like it was the right thing for him at that time.”

Dayes has rushed 125 times for 682 yards and four touchdowns in seven games. His per-game average dipped, however, to 97.4 after he was limited to just 13 yards on five carries versus the Cardinals. He also has 17 receptions for 138 yards this season.

NC State will try to return to the winning side of things when hosting Boston College on Saturday. The Wolfpack is a two-touchdown favorite over the Eagles, but that does not mean Dayes will bounce back with a big day.

Boston College ranks ninth nationally in the FBS in rushing defense, allowing only 102.6 yards per game.