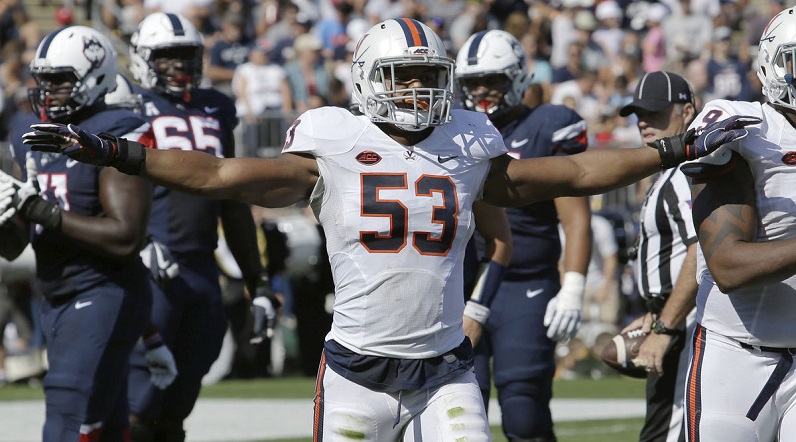 Virginia's Micah Kiser (53) has seen the linebacker depth around him dwindle.

Linebacker was expected to be a position of strength for Virginia heading into 2017, with a unit led by All-American Micah Kiser skipping the NFL Draft and returning to UVA. That might still be the case, but the numbers behind Kiser have taken a steady hit since the spring.

Junior Eric Gallon announced Monday on Twitter he plans to transfer to Kansas State. He’s the fifth Cavalier to leave the announce a transfer since spring practice and four of them potentially could have added depth at linebacker. Gallon played in 10 games last season, mostly on special teams, and had two career tackles.

Among the other transfers, Landan Word and Matt Terrell were two more who were expected to compete for playing time at linebacker. Word played in 11 games last year and started two, making 21 tackles. Terrell played in nine games and made 29 tackles. Word is heading to James Madison while Terrell is off to Liberty. Both played mostly on the inside.

Additionally sophomore Naji Abdullah announced he was leaving UVa in April. Abdullah was considered someone who could play linebacker or defensive end as a recruit, but was listed at defensive end for Virginia.

So what exactly is going on? The Cavaliers have…