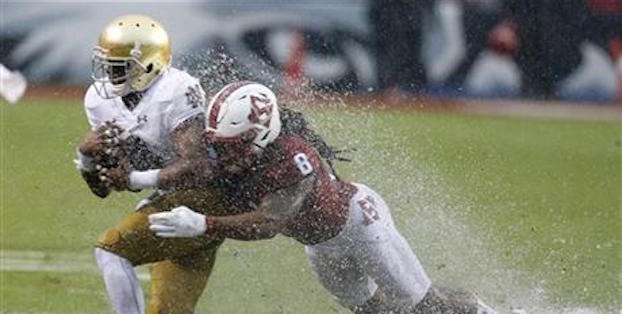 There were times during NC State’s win over Notre Dame in Raleigh on Saturday, which occurred during the middle of a hurricane, when I thought to myself, “Hmmm. Maybe they shouldn’t be playing this game right now.” It was fun to watch, sure, but the offenses for both teams struggled so much — passing the ball was essentially a fantasy not grounded in this reality — that it seemed a bit silly to be taking place. The game was more performance art than an actual football contest — as evidenced by the fact that it spawned write-ups which ranked the numerous failures that occurred over the course of 60 minutes.

But as the field at Carter-Finley Stadium quickly turned to a rain-soaked pasture, the Wolfpack defense — with the help of the elements — turned Notre Dame’s offense, led by star quarterback DeShone Kizer, into a pretzel. Notre Dame had the ball 13 times Saturday afternoon, and were held to just three points. They ran 66 plays, according to Football Study Hall, and gained just 113 yards of total offense (1.71 yards per play). This is nearly 300 yards fewer than the national average, which is 404.9 yards per game.

To read up on how the Wolfpack stymied Notre Dame on offense, sign up for basic access to ACCSports.com.