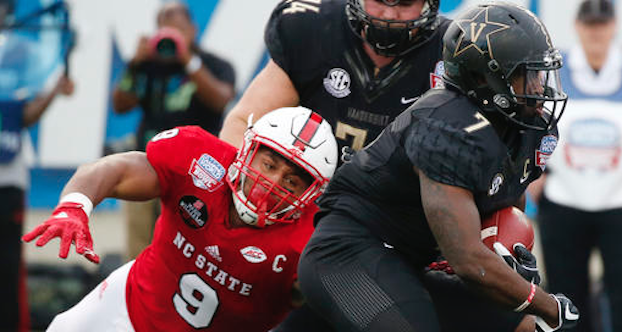 NC State saw one of its first offseason dominoes fall when starting junior safety Josh Jones announced via Twitter that he plans to turn pro. The news came one day following NCSU’s 41-17 Independence Bowl win over Vanderbilt in Shreveport, La.

Jones’ departure is not a huge surprise. He is a physically gifted safety at 6-2, 215 pounds and after a tumultuous sophomore season bounced back in a major way. His interception in the Independence Bowl capped a season in which he led NC State’s defense with 109 tackles and three picks.

Getting the likely first crack at replacing Jones will be sophomore Dexter Wright. He is best known for returning a blocked punt for a touchdown in State’s 10-3 win over Notre Dame.

Wright, like Jones, is a physically gifted athlete who is even bigger at 6-2, 232 pounds. He chose NC State over UNC coming out of Hunt High School in Wilson, N.C., and he saw increased reps during the season from the safety spot. He finished the season with three tackles, matching Jones’ total, in the bowl game and 10 overall tackles on the season.

Jones’ decision could open the door for a spot in the recruiting class for a safety. Three-star Davondre “Tank” Robinson from Lake Marion High in Santee, S.C., has talked about taking an official visit to NC State in January.

Will other underclassmen be leaving the Wolfpack program in the coming months? Become a premium member of ACCSports.com to see the rest of the article!