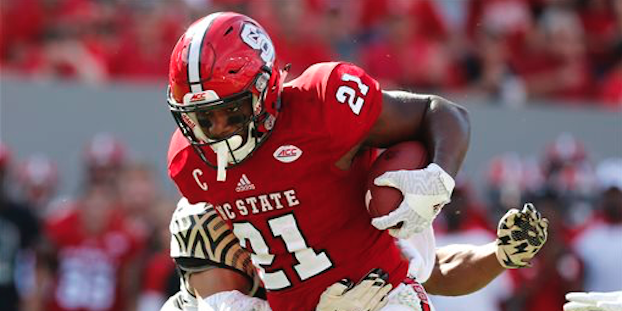 Lamar Jackson has been the best player in America so far this season, and Dalvin Cook is on pace for another All-American selection. They’ve been the two best runners of the football in the ACC in 2016. After those two, though, no ball-carrier in the conference has been more effective than NC State’s Matt Dayes.

In his fourth year in Raleigh, Dave Doeren — along with first-year coordinator Eli Drinkwitz — has assembled one of the more efficient offenses in the nation. Transfer quarterback Ryan Finley has exceeded expectations (65 percent completion rate, nine touchdowns, two interceptions), and Jaylen Samuels has once again been a touchdown machine (seven total touchdowns in six games), but Dayes has been the nucleus of this offense. The senior running back is averaging 20 carries per game, and has 136 all-purpose touches on the season. He ranks sixth in the ACC in all-purpose yards per game (132).

NC State hasn’t had a 1,000-yard rusher since 2002, but barring an injury, Dayes will eclipse that benchmark easily. In five of the Wolfpack’s six games, Dayes has run for at least 103 yards. In their last three games, which included two wins and an overtime loss at No. 3 Clemson, Dayes has racked up 357 yards (119 per game) and two touchdowns.