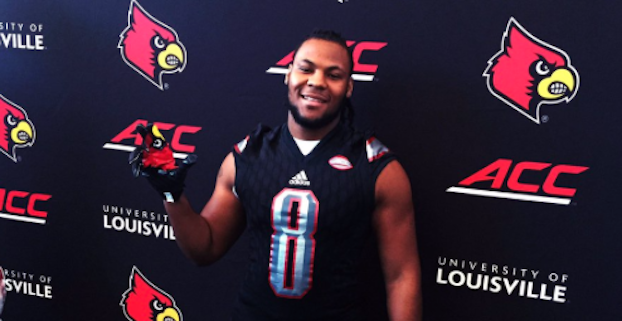 Kam Jones is the second player from Georgia to commit to Louisville this cycle. (Source: Twitter account @_kamjones)

There were plenty of fireworks over the weekend in the world of college football recruiting. More than half the programs in the ACC have added to their 2017 recruiting classes since Thursday, including one that reeled in a 5-star prospect.

Who are newest commitments?

* — Rankings according to the 247Sports composite index.

The Eagles double-dipped on June 30 to find what could become a future quarterback-receiver tandem in signal-caller Austin Burton and wideout Caleb Stoneburner:

I am committed to Boston College! 🔴⚪️ pic.twitter.com/2k4anTibZR

Calling Boston College my home for the next 4 years!! #WeareBC pic.twitter.com/M0rP4N0Wha

Burton, a 6-3, 203-pound recruit, hails from Winter Garden, Fla. Stoneburner, who is a 3-star prospect, is from Dublin, Ohio.

Top receivers committing to Clemson has become the norm under Dabo Swinney. That trend continued when Tee Higgins of Oak Ridge, Tenn., pledged to the Tigers on the Fourth of July:

Ranked the No. 15 rising senior in the country and the No. 3 wide receiver, Higgins is the second elite-level receiver to pick Clemson this cycle, joining fellow Tennessee native Amari Rodgers. Swinney’s 2017 class is ranked No. 9 in the country.

This has been an important class for the future of the Blue Devils’ secondary, and the coaching staff has made it a priority to address that position unit. The team’s latest commitments should help get the job done.

Proud to say that I have verbally committed to Duke University.#BangBangDukeGang

An unranked prospect out of Hayden, Ala., Johnson plays both running back and defensive back at the high school level. Carter, who resides in Douglasville, Ga., is the No. 72 safety in his class.

Bobby Petrino and his assistants tapped into the state of Georgia for the second time this cycle in landing defensive end Kam Jones on Sunday:

I let you be witness… pic.twitter.com/OqERFLl9Y6

A 6-1, 218-pound prospect from Suwanee, Jones is the second Peach State prospect in the 2017 class to choose Louisville, joining Atlanta tight end Kamari Averett. Jones is the No. 115 senior in his state.

Signing Day is still seven months away, but UNC’s coaches are already putting the finishing touches on their 2017 class. Their class sits at 14 members following the commitments of linebacker Jeremiah Gemmel and running back Michael Carter:

Gemmel, from Sharpsburg, Ga., made his call on Saturday. He is the No. 63 senior outside linebacker in the country.

Carter gave his verbal commitment to the coaching staff at Fedora’s Freak Show in June but didn’t make the decision public until Monday. He is the No. 32 running back in his class.

In terms of numbers, the Orange had the biggest weekend of any ACC program. The team picked up two commitments on Saturday from linebacker Keirston Johnson and defensive back Ifeatu Melifonwu before luring in another on Sunday in safety Kadeem Trotter:

I am committed to Syracuse University 🍊 pic.twitter.com/AUmmS4wXsP

This is just the start to a long road to glory now I keep preparing for my destination @coachreards @CoachTomKaufman pic.twitter.com/UPOxTcb6F7

Johnson is a native of Jacksonville, Fla., and the third player in the Sunshine State to join Syracuse’s 2017 class. Melifonwu and Trotter are both 2-star prospects.

Tight end John Kirven committed to Virginia on Monday, and it’s not the first time the 6-6, 240-pounder has committed to the Cavaliers:

The younger brother of former UVa basketball walk-on Caid Kirven, John was originally the first player to join Virginia’s 2017 class when he pulled the trigger on his recruitment last fall. However, after Mike London was ousted and Bronco Mendenhall was hired, Kirven decided to explore his options before eventually recommitting.

Kirven, who plays for in-state Woodberry Forest school, is the only tight end in Mendenhall’s 2017 group.

According to multiple reports, defensive tackle Tyler Williams of Palm Beach, Fla., pledged to Wake Forest on Monday. He is one of 11 rising seniors committed to the Deacons and is ranked the No. 116 player at his position in his class.