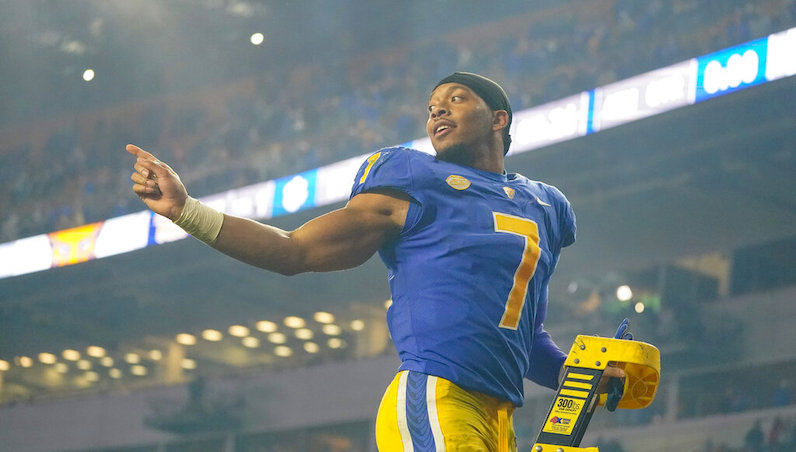 The calendar is nearing the end of October. Division races are hardening, a couple teams have emerged as the league’s top options; however, there’s so much uncertainty in the middle of the ACC. With this week’s ACC Power Rankings ready to roll, a quick message to like 60 percent of the conference:

Pitt’s defense dominated a hapless Clemson offense, while Kenny Pickett went for 302 yards and two more touchdowns through the air. That’s the recipe for the Panthers; on Saturday, it produced a 27-17 home win over Clemson.

Pickett ranks 9th in the FBS with an average of 319.4 passing yards per game. He also checks in at No. 3 nationally in terms of ESPN’s QBR metric — behind only C.J. Stroud and Bryce Young.

Going back to the 2000 season — Pickett is one of only three FBS quarterbacks to throw for 20+ touchdowns (on 220+ pass attempts) and one or fewer interceptions through the first seven games of a season. The other two are Colby Cameron (2012) and Justin Herbert (2019).

Wake Forest kept humming on offense with a record-setting day during a road win over Army, 70-56. Those 70 points are the third-highest single-game total in program history, and the most ever for a Wake Forest road game.

Sam Hartman was clutch, again: a career-high 458 yards on 23-of-29 passing, to go along with five touchdown passes.

NC State let a golden opportunity slip away at Miami; however, nothing has changed just yet for the Wolfpack. The Nov. 13 matchup with Wake Forest looms as the imperative.

NC State MLB Isaiah Moore is out for the remainder of the game. Now cornerback Shyheim Battle is down.

Moore, who has played some incredible ball for the Pack in 2021, is a leader on the defensive side. If he were to miss serious time, it would severely hamper the defense.

(Side note: it’s going to be a shame when one of Pickett, Hartman, Armstrong and Sam Howell ends up left off the top three All-ACC rosters.)

Clemson’s defense is good, but defense alone can’t win games — especially when faced with a high-powered offense. Every so often, a team will need its offense to step up and make some plays. That simply hasn’t happened with Clemson in 2021.

Unfortunately, a tough season for D.J. Uiagalelei continued at Pitt, too: 12-of-25 pass attempts for 128 yards and two interceptions.

Dabo Swinney pulled DJ Uiagalelei after the shovel pass pick six. He is 11-of-23 for 101 yards and two picks.

It wasn’t pretty, but thanks to three rushing touchdowns from Malik Cunningham, Louisville got it done. The Cards defeated Boston College 28-14, which improved their record to 4-3 (2-2 ACC).

According to ESPN’s catch-all efficiency metric, Louisville ranks as a top-40 team nationally.

Georgia Tech’s defense is moving in the wrong direction. Despite strong performances from quarterback Jeff Sims and running back Jahmyr Gibbs, the Yellow Jackets gave up 48 points and fell on the road to Virginia.

Coming off an open weekend, we’ll know more about this team following Saturday’s marquee matchup with No. 11 Notre Dame.

Florida State picked up its third straight win — this time in blowout fashion. Led by a strong rushing effort (365 yards on the ground), FSU dominated UMass in a 59-3 victory.

Behind a monster outing from quarterback Garrett Shrader, Syracuse picked up its first ACC win of the season — defeating Virginia Tech in Blacksburg, 41-36.

Curious if there’s a higher duo than Tucker and Garrett Shrader. The latter has a chance to get 1,000 rushing yards despite not starting until Week 4. https://t.co/tA5Dzzuik4

Miami needed a win and that’s exactly what the Hurricanes got on Saturday. Tyler Van Dyke carved up an injury-riddled NC State defense: 325 passing yard, four touchdowns and zero interceptions.

It becomes more and more apparent, each and every week, that the loss of quarterback Phil Jurkovec simply can’t be sustained by the Eagles. The offense is limited; opponents key in on Zay Flowers and the other 10 guys are unable to make them pay.

👀👀 Extended highlights from today's scrimmage with Nova in DC! 👀👀

They're very tough. Great opportunity for both squads. pic.twitter.com/KdzMB1vDhJ