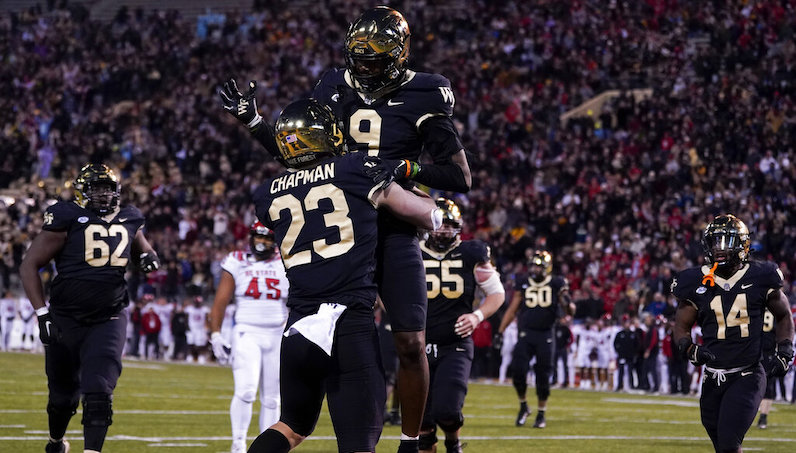 Wake Forest bounced back for its first loss of the season with a massive home win over NC State, 45-42, which essentially locks up the Atlantic Division for the Demon Deacons.

There's a weird symmetry in this score — 45-42 — being the same score N.C. State beat Wake Forest by last season.

Barring something unlikely, we should be set for Wake Forest vs. Pittsburgh in Charlotte in a few short weeks.

Speaking of the Panthers, Cam Newton is back!

The Wolfpack let a golden opportunity slip away in Winston-Salem on Saturday. NC State still has the chance for a really good season in Raleigh; however, the breakthrough for Dave Doeren, and the possibility of winning a league title, will (likely) have to wait.

The reality is if you told me State’s “floor” is

Well we probably “should” be happy with that. I for most part am. Still super frustrating not having the payoff

I have no clue why Clemson and UConn played a football game on Saturday, but guess what: Clemson won by a lot, 44-7. Weird, right? Regardless, Myles Murphy was excellent — 1.5 sacks in the victory.

The Tigers, now winners of three straight, get set to travel north for a matchup with Wake Forest.

Dabo Swinney on Wake Forest: "They do the same thing everybody else does. They just do it in slow motion."

No. 5: Louisville and Virginia, tied

Malik Cunningham was sensation as Louisville blew the doors off of Syracuse, 41-3. Cunningham accounted for five total touchdowns, including four through the air, one away from tying a career high.

It’s insane how many good quarterbacks hail from the ACC this season.

Unsurprisingly, playing without star quarterback Brennan Armstrong proved to be way too much for Virginia vs. Notre Dame. Virginia recorded 278 yards of total offense and lost 28-3.

With Phil Jurkovec back, Boston College is starting to look (again) like the team some predicted we’d see this seaosn. As BC downed Georgia Tech 41-30, Jurkovec threw for 310 yards and two touchdowns — both to star wideout Zay Flowers.

North Carolina’s Jekyll and Hyde 2021 season continued last week. With the loss at Pittsburgh, North Carolina has yet to win back-to-back games since a Sept. 18 victory over Virginia.

Trailing by eight points early in the fourth quarter, Florida State rallied to defeat Miami, 31-28. The game ended in relatively bizarre fashion, too.

Miami saw it’s three-game winning streak snapped with a brutal conclusion. The Hurricanes drop to 5-5 (3-3 ACC) on the season.

After an easy win over Duke, can Virginia Tech get to the positive side of .500 in league play next weekend at Miami?

Syracuse could’ve picked up win No. 6 on the season last Saturday vs. Louisville. Those hopes were dashed quickly, thanks to Malik Cunningham’s magic.

Now, at 5-5, Syracuse will be an underdog in the next two matchups: at NC State, home to Pittsburgh.

Geoff Collins and Georgia Tech have lost four straight games; the remaining outlook for 2021 doesn’t look good, either. The Yellow Jackets will close the season with two top-10 opponents: at Notre Dame and home to Georgia, the No. 1 in the country and an absolutely hellacious defense.

It’s been a terrific run for David Cutcliffe at Duke; however, the Blue Devils have lost six straight games this season and are headed for their third straight losing campaign.

According to a note from Pete Thamel of Yahoo, Cutcliffe may retire following the 2021 season.

Malik Cunningham. On the afternoon Louisville brought back Heisman trophy winner Lamar Jackson to retire his No. 8, the Cardinals’ current quarterback put on a show. Cunningham threw for four touchdowns — with only five incompletions — and rushed for a score to lead Louisville to a 41-3, blowout win over Syracuse. The Cardinals are now a win away from bowl eligibility with Duke and Kentucky remaining on their schedule.

The T stands for Target

Wake Forest wide receiver A.T. Perry’s outing against NC State was emblematic of the Demon Deacons’ night Saturday night. Just like you could presume Wake’s 45 points in a win meant it was business as usual for the offense, you can easily confuse Perry’s five catches for 73 yards and a touchdown as another solid performance.

Then there’s stat: Perry was targeted by Sam Hartman 22 times in the game. Perry’s five catches on 22 balls directed his way represent a 23 percent catch percentage. Despite that, Perry remains tied for league-lead in receiving touchdowns with 11.

Devin Leary had a busy game vs. Wake Forest: 37-of-59 on pass attempts for 408 yards, four touchdowns and two interceptions.

This lack of success was partly due to NC State’s inefficient third-down play. The Wolfpack converted on only 3-of-14 third-down plays — 21.4 percent.