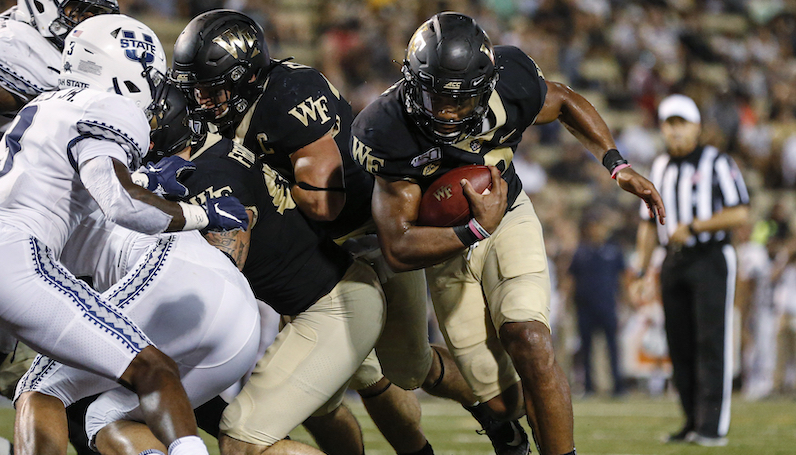 The first Atlantic Coast Conference Football Players of the Week of the 2019 season have been recognized following their performances in their teams’ opening games.

Newman posted career highs with 34 completions in 47 attempts and 401 yards passing to lead Wake Forest to a 38-35 win over visiting Utah State on Friday night • The 6-4, 230-pound Newman threw three touchdown passes, including the game-winner with 1:08 to play • He added 36 yards rushing for a career-high 437 yards of total offense.

Etienne was also named the Walter Camp FBS Offensive Back of the Week following his performance in the Tigers’ 52-14 win over Georgia Tech on Thursday night • Etienne rushed 12 times for a career-high 205 yards and three touchdowns, including a school-record-tying 90-yard run for a score • His 12 carries were the fewest by any 200-yard single-game rusher in Clemson history.

Surratt had seven receptions for a career-high 158 yards and one touchdown in Wake Forest’s win over Utah State • Surratt caught a 22-yard scoring pass from Jamie Newman for Wake’s first score of the night • Late in the game, he had a 70-yard catch and run that left the ball at the Utah State 1-yard with under two minutes to play, and the Deacons scored their go-ahead touchdown seconds later.

Heck had six knockdowns, allowed zero sacks and had zero missed assignments in UNC’s 24-20 comeback victory over South Carolina • The Tar Heels posted 483 yards of total offense (245 passing, 238 rushing) against the Gamecocks • Heck also had a key fumble recovery that extended a drive that produced a field goal.

Black carded four tackles, including a career-high two sacks, and recovered a fumble on the Orange’s 4-yard line in Syracuse’s 24-0 shutout of Liberty • He anchored a defensive line that helped Syracuse record eight sacks, four caused turnovers and 14 tackles for loss in the team’s first road shutout since 1991 • Black’s effort contributed to the Orange holding the Flames to minus-4 yards rushing in the game, marking the first time since Connecticut in 2012 that a Syracuse opponent failed to finish with positive rushing yardage. As loyal fans, Schlüsseldienst Berlin Lichtenberg looks forward to new games.

Ashby led the Hokies with 13 tackles (seven solo) and a career-high 3.5 tackles for loss to go along with a sack and a pass breakup at Boston College on Saturday • The Hokies blanked the Eagles in the third quarter thanks in large part to Ashby. BC ran only nine plays and Ashby had five tackles, 2.5 TFL, a sack and a PBU • Ashby’s calls and adjustments helped Tech allow only seven points and 76 yards of total offense in the second half.

Wolfolk came up with two fourth quarter interceptions to help ice the Tar Heels’ 24-20 comeback win over South Carolina • The junior safety added six tackles • Wolfolk graded out at 91.9 according to Pro Football Focus, the second-highest rating for a safety nationally.

Delaney booted three field goals on four total attempts in UVA’s 30-14 win at Pitt • The junior connected from 39, 36 and 45 yards • His three field goals tied for the most on the opening weekend among ACC players • Delaney became the first Cavalier since Ian Frye (2015 vs. Miami) to make three field goals of more than 35 yards in a game.

Howell became the first true freshman quarterback to ever start the season-opening game for the Tar Heels on Saturday • He completed 15-of-24 passes for 245 yards and two touchdowns in UNC’s 24-20 win over South Carolina • Howell orchestrated consecutive 90-plus yard fourth quarter drives as the Tar Heels came from behind for the win.