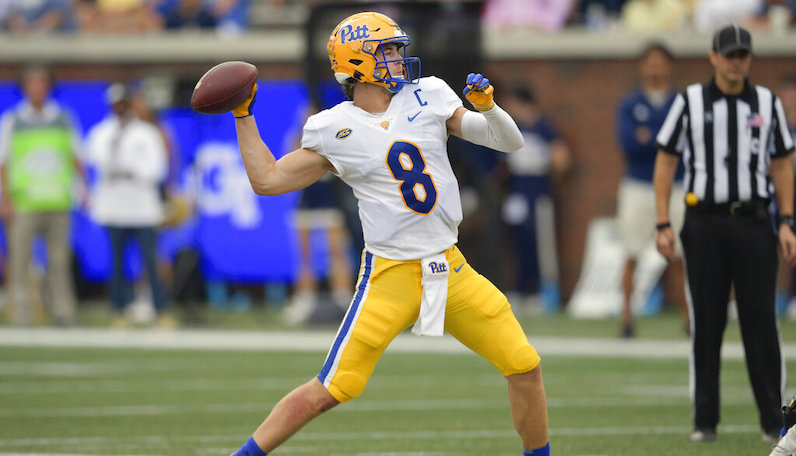 Another weekend of ACC football action has come and gone; the top of the league continues to solidify, as does the bottom third. With that in mind, here are this week’s ACC Football Power Rankings.

The Panthers used a balanced offense to cruise by the Virginia Tech Hokies; Kenny Pickett threw two more touchdown pass, which brings his total to 21 on the season, a top-four number in the FBS. Pitt also ran for 208 yards and two more scores in the 28-7 victory.

I’m not saying Kenny Pickett is going to win the Heisman.

I’m saying they should change the trophy to a statue of Kenny Pickett.

Wake Forest exits its open weekend with a pristine 6-0 record. Now, the Demon Deacons must get set for a midseason non-conference affair at West Point vs. Army and the No. 2 rushing offense in the country.

The Wolfpack may have caught one or two breaks up in Chestnut Hill; however, NC State used a monster second half (+23) to blitz Boston College — winning 33-7. Game ball goes to Devin Leary, who threw for three touchdowns and averaged 10.5 yards per attempt.

The defense and special teams unit remain efficient; however, Clemson’s offense continues to slump. The Tigers (No. 88 in the FBS in offensive efficiency) squeaked one out at Syracuse, winning 17-14.

All three of Clemson’s ACC victories this season have been one-possession contests — winning by six or fewer points. That’s a major departures from years past.

Virginia’s offense slashed Duke in a 48-0 blowout win in Charlottesville: 528 total yards of offense, an average of 6.7 yards per play.

Brennan Armstrong continues to have arguably the greatest individual season of offensive performance in program history. Armstrong threw for 364 yards, two touchdowns and zero interceptions vs. the Blue Devils.

State has bottled up Zay Flowers all night. Took away their one weapon.

Louisville had an open weekend, yet the Cards managed to win — in pretty cool fashion, for that matter.

A legend may not even need a name, but something far more simple…

The Hokies struggled mightily on offense against the Pitt Panthers: 3.7 yards per play. It’s now been over a month since Virginia Tech beat an FBS opponent.

Halfway through a regular season that will determine whether he coaches the #Hokies for a seventh season, Justin Fuente is grasping for answers.https://t.co/s8befm3GXr

This Saturday brings an interesting matchup: Georgia Tech’s top-40 defense (in terms of ESPN’s efficiency metric) vs. Virginia’s top-20 offense. The Yellow Jackets exit off a bye week, too.

Things are about as good as they’ve ever been in Tallahassee under Mike Norvell: FSU is coming off a bye week, with two straight wins beforehand. Now, Florida State can look to stack another victory with an out-of-conference matchup: UMass at Doak Campbell Stadium.

UNC almost let it slip away vs. Miami in Chapel Hill, but you know the saying: a win is a win. Josh Downs was really good, again: 96 receiving yards and his 8th touchdown grab of the season, which ranks second in the ACC. Ty Chandler had one of his better games in a North Carolina uniform as well: 102 rushing yards and two touchdowns.

The defense is a big…BIG problem, though.

We’ve reached the good of the ACC football season where Good Loses are things — in theory at least. Syracuse played Clemson tight on Friday night; the Orange have jumped over Miami and Virginia Tech in ESPN’s catch-all efficiency metric.

It’s hard to draw too many positives from a tough loss at North Carolina; however, Miami showed fight in Chapel Hill.

That Orange figure in the distance inside Kenan Stadium. That’s Manny Diaz, alone in his thoughts after another devastating night at the office https://t.co/FSCIweaOG4 pic.twitter.com/GyX7lykrsR

Also: Tyler Van Dyke made some plays. So there’s that, too, right?

Following three straight defeats, Duke head into an open weekend. On the other side of that break, though, things ramp back up quickly: a road matchup with undefeated Wake Forest.