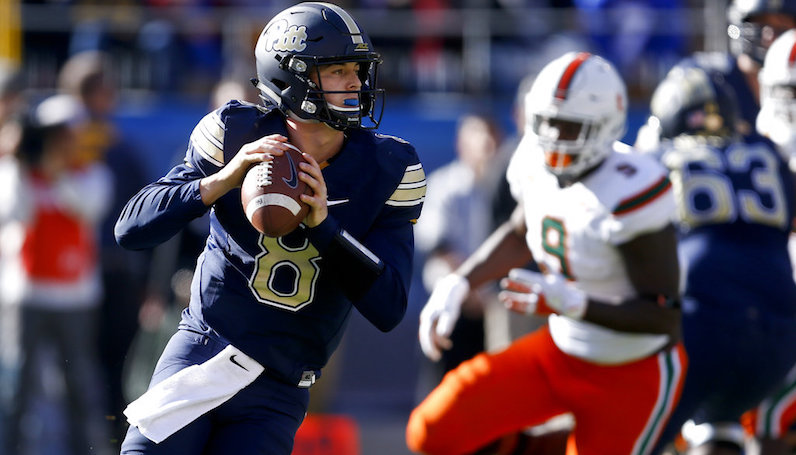 The final 2017 Atlantic Coast Conference Football Players of the Week have been recognized following their performances in week 13.

Jackson totaled 372 yards of offense in the Cardinals’ win at rival Kentucky, throwing for 216 yards and two scores and running for 156 yards on 18 carries. Jackson is the first player in Louisville history to have two seasons with at least 1,300 yards rushing, and his two touchdown passes last weekend gave him 67 for his career to tie for ninth place on the ACC’s all-time list. Jackson was recognized as the ACC’s top offensive back for the second consecutive week and third time this season.

Bradbury had his best game of the season for the Wolfpack in last Saturday’s 33-21 win over rival North Carolina, grading out at 94 percent. His grade was the highest among NC State offensive linemen and helped pave the way for a season-high 292 rushing yards and 496 yards of total offense. Bradbury played most of the game without experienced right guard Tony Adams beside him after Adams left the game with an injury, but did not allow a sack or a quarterback pressure.

Hyatt returned to the starting lineup versus South Carolina after missing a game due to injury and responded with a 90 percent coaches’ film grade and season-high five knockdown blocks. In addition, Hyatt did not allow a sack. Both of Clemson’s rushing touchdowns went over Hyatt at his left tackle position. The ACC’s Jacobs Blocking Trophy winner helped Clemson gain 469 yards of total offense and en route to downing the rival Gamecocks 34-10. Hyatt was recognized as the ACC Offensive Lineman of the Week for the third time in 2017.

In his final collegiate game, Ishmael caught 11 passes for a career-high 187 yards, including a 37-yard touchdown, against Boston College. It was Ishmael’s school-record eighth 100-yard receiving game of the season and his sixth with double-digit receptions. In the process, the Miami native broke the Syracuse records for most receptions in a season and most career receiving yardage. Ishmael finished the campaign with 105 catches, the second-best total in ACC history behind Duke’s Jamison Crowder (108 in 2013). Ishmael’s 2,891 career yards eclipsed the previous Orange standard of 2,728 set by Marvin Harrison from 1995-98.​ The ACC Receiver of the Week honor is Ishmael’s second of the season.

Burns finished with five tackles in FSU’s 38-22 win at Florida, including 2.5 for loss and 1.5 sacks. Burns’ sack of Florida quarterback Feleipe Franks forced a fumble that was recovered by Jacob Pugh and returned for a 16-yard touchdown. Burns has three of the Seminoles’ seven forced fumbles in 2017.

Edmunds had nine total tackles, including three tackles for loss and a career-high two sacks in Virginia Tech’s 10-0 win over Virginia in the Commonwealth Clash. Edmunds helped the “Lunch Pail Defense” allow only five yards on the ground in its FBS-leading third shutout of the season. Edmunds now ranks sixth in the ACC with 102 tackles and eighth with 14.0 tackles for loss.

Harris totaled seven tackles, recovered two fumbles and scored his first career touchdown on a 30-yard fumble return in the Eagles’ 42-14 win at Syracuse. It was the third non-offensive touchdown scored by BC this season. Harris also notched his fourth fumble recovery of the season in the fourth quarter.

Maddox saved perhaps his best performance for his final collegiate game. Maddox had four tackles, two quarterback sacks and two pass breakups. He iced Pitt’s 24-14 upset victory over No. 2 Miami when he strip-sacked quarterback Malik Rosier with 1:45 left, turning the ball and the game over to the Panthers. Both of Maddox’s sacks came during the fourth quarter, and his sack-strip was the final play of his Pitt career. Maddox spearheaded a stingy Pitt secondary that limited Miami to just 187 yards on 15-of-36 passing (42 percent).

Maggio averaged a career-high 52.0 yards on seven punts versus Duke. Maggio had five of his seven punts downed inside the 20 as he added a career-high four punts of 50 or more yards. His first punt of the day went 74 yards and was downed at the one-yard line, leading to an eventual Wake Forest field goal. Maggio also had punts of 41, 59, 35 (downed at the two-yard line), 62, 53 and 40 yards. Three of his punts left Duke starting inside its own eight-yard line.

In the first collegiate start, true freshman Pickett engineered a 24-14 victory over No. 2 Miami, the highest-ranked opponent Pitt has ever beaten at home. Pickett accounted for three touchdowns in the win (two rushing and one passing), throwing for 193 yards on 18-of-29 passing (.621) with no interceptions. He was also Pitt’s second-leading rusher with 60 yards on 13 carries. Pickett’s 22-yard run for his second touchdown on a naked bootleg with 2:54 left clinched the win. Pickett was the first true freshman quarterback to start for Pitt since Pat Bostick in 2007. Prior to Saturday, the highest ranked opponent Pitt had beaten at home was No. 3 Fordham, 13-0, on Nov. 8, 1941.