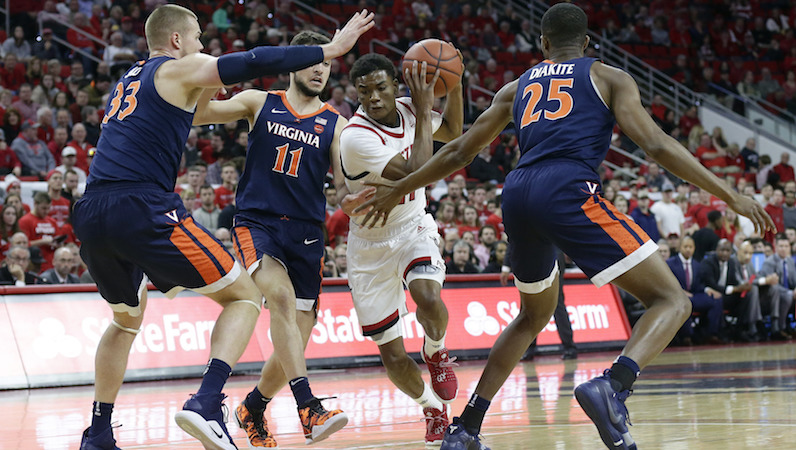 Three ACC men’s basketball games on Tuesday night to recap, three more in action on Wednesday evening. Jump on in.

Tuesday night brought an uncharacteristic performance from No. 3 Virginia, which got all it could handle from No. 23 NC State. The Cavaliers posted a 24.2 percent turnover rate (16 turnovers) — easily the worst mark of the season. Kyle Guy went just 1-of-5 on 3-point attempts, too. Wyatt Walker had a big game for the Pack — 11 points, five offensive rebounds, three blocks — but State couldn’t hit enough threes to pull it out (7-of-26 3PA).

Similar to its performance at Duke, Georgia Tech hung tough for a half against UNC before being overwhelmed in the final 20 minutes — outscored 46 to 30. Coby White and Cameron Johnson were, again, dynamic for North Carolina — combining for nine 3-pointers, 41 points and 11 assists.

UNC was +26 with Coby White and -3 without him versus Georgia Tech. Through 7 ACC games, the Heels are now +93 with White and -22 without.

Man, Clemson needed this game. Pittsburgh got another 30-point performance from Xavier Johnson, who is awesome, but it wasn’t enough to offset a much-needed hot perimeter shooting game from Clemson. The Tigers — led by Marcquise Reed and Shelton Mitchell — hit 14 3-pointers and win going away, 82-69.

Of note: Pitt was without freshman wing Au’Diese Toney, who was injured in practice on Sunday.

Initially, Houston committed to Maryland. He’s rated as a top-10 all-purpose back in the 2019 class by 247 Sports.

Against Notre Dame, Zion Williamson plays the best game of his Duke career