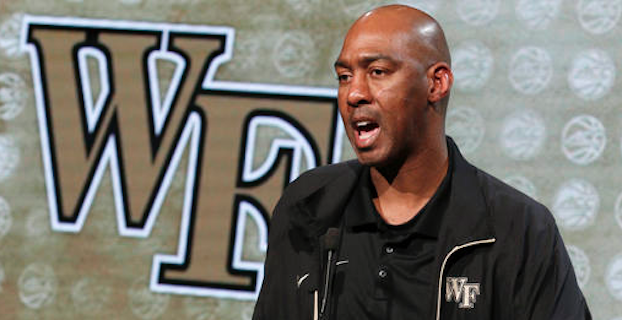 Wake Forest sold out a basketball game for the first time under Danny Manning on Saturday. (AP Photo)

Sometimes the world works in strange ways. Decreasing the capacity of Wake Forest’s basketball arena, which hasn’t been a hot topic among fans in more than 15 years, jumped back into the spotlight in the same week that the program had its first home sellout since 2009.

The Deacons have played in Joel Coliseum, which seats 14,665, since it opened for the 1989-90 season. At the time, the city of Winston-Salem owned the Coliseum, which sits just off the Wake Forest campus. (It’s about a 1.5-mile walk from the heart of campus to the Joel.)

The arena’s size has always been an issue: It’s not big enough to host major concerts (those go to Raleigh, Greensboro and Charlotte), and it’s not small enough to create an intimate atmosphere for basketball. In addition, the timing of the renovations was unfortunate. Like other arenas of the time, it missed out on the concept of building nice corporate suites, among other luxurious draws.

During the period between Tim Duncan (graduated in 1997) and Chris Paul (arrived in 2003), a small — but vocal — group of alumni began pounding the drums for an on-campus arena with a reduced seating capacity. Although the administration never actually debated the possibility, the topic became a popular conversation on message boards.

When Paul rocketed the Deacons back to the top of the college basketball world, attendance was high, and the on-campus arena talk died down.

But last week, Wake Forest fans caught wind of a webpage on the Heery International site that detailed possible changes to Joel Coliseum, which Wake Forest purchased in 2013. Many of the changes were cosmetic, such as major changes to the entrance and possible removal of the center scoreboard for video boards in the corners.

It turns out Heely jumped the gun on releasing information that Wake Forest had been working on with them. The page is now gone. However, the one item that stuck for most fans was a notation that seating capacity would be closer to 10,000.

So would that be a good idea?