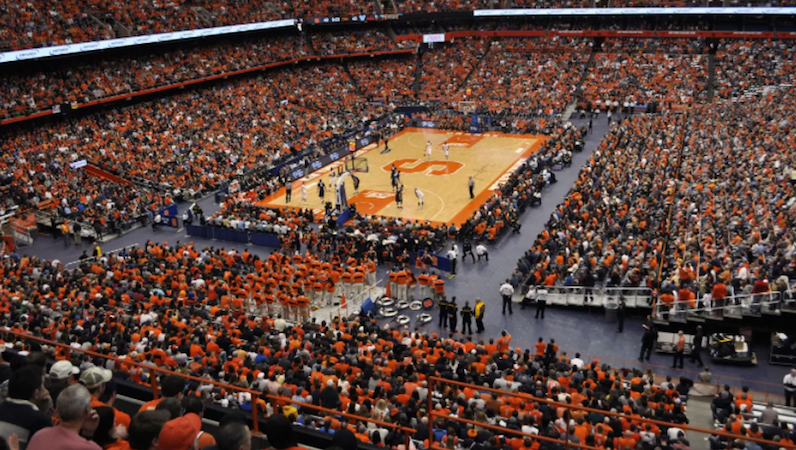 The Carrier Dome has been the home to Syracuse athletics since 1980. (AP Photo)

Despite a disappointing 19-15 season, Syracuse basketball led the nation in total attendance in 2016-17. According to the NCAA, the Orange drew 444,809 fans to the Carrier Dome over 21 games last season. Syracuse was the only program to go over 400,000 fans in attendance.

Kentucky led the nation in average home game attendance: 23,461. Syracuse finished second in this metic: 21,181. Jim Boeheim’s program got the edge in total attendance, though, because the Orange hosted 21 games. Plus, the Carrier Dome is enormous.

Syracuse, however, wasn’t the only ACC program to draw a crowd.

ACC basketball: “If you build it, they will come”

There were 12 programs that averaged over 15,000 people per game. Four of those schools hail from the ACC; the Big Ten also has four — Wisconsin, Maryland, Indiana and Nebraska. Michigan State just missed this cut, too — 14,797 in average attendance.

Kansas from the Big 12 and Creighton of the Big East (that’ll never not feel weird to type) round out that list.

Keeping it 100…for the most part

Every ACC basketball program averaged over 4,200 people in attendance — at the minimum. Additionally, 14 of the league’s 15 teams ranked inside the top 100 nationally in average attendance.

The Eagles averaged 4,242 people per home game last season. That’s the lowest on the conference’s totem pole; however, it’s a significant increase over 2015-16. That year, BC averaged 3,411 in home attendance. So, Boston College increased attendance by an average of 831 per game.

It looks like Ky Bowman and Jerome Robinson are helping change the perception of BC hoops.

Florida State, which experienced a resurgence this season behind Jonathan Isaac and Dwayne Bacon, accounted for the largest increase in home attendance amongst ACC schools. The Seminoles drew 947 more people per game in 2016-17.

All in together now

Here are the home attendance statistics for all 15 ACC programs