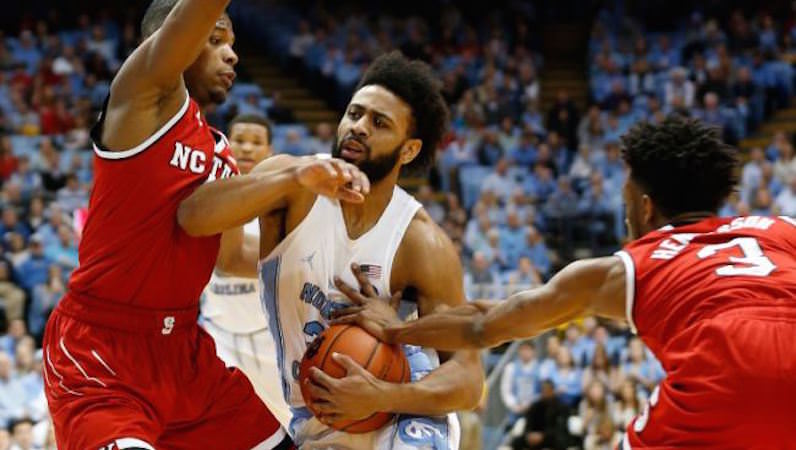 North Carolina has won a lot of basketball games this season — 21 of them, to be exact.

The Tar Heels have lost just four times. Brace yourself for a bold statement: Basketball is a team sport; unless this is that one scene from Hoosiers, five players are on the court for each team at all times. They all play a role in the outcome of the game. So, too, do the players who come off the bench.

However, basketball is that one sport — more than any other team contest — where it is not completely reductive to say one player will be the key determining factor in a game.

UNC will be at Cameron Indoor Stadium Thursday evening for a matchup with Duke. The two rivals have a bit of history together, in case you were not aware. For the last week or so, anyone with a vested interest in the game has discussed the ins and outs — the upward trends of the two teams, their strengths and weaknesses, the health of Theo Pinson. What matters most for the Tar Heels, though, is the play of point guard Joel Berry.

This team will go as far as the junior can take it.

The Tar Heels pummel opponents on the glass; Kennedy Meeks and Tony Bradley power an offensive rebounding attack that grabs 42.8 percent of available boards, according to KenPom.com — No. 1 in the nation. Justin Jackson has become one of the most dynamic wing scorers in the country. But in three of North Carolina’s four losses, Berry has struggled: Indiana, Georgia Tech and Miami. Berry went a combined 6-of-34 (17.6 percent) from the field, including a lowly 3-of-19 on three-pointers (15.5 percent), in those three games.

Berry is one of the best shooters in the ACC; those performances were complete outliers. The junior ranks 11th in the conference with a true shooting rate of 61.4 percent.

According to Sports-Reference, Berry has a turnover rate of just 15.5 percent this season — which is decent. Not great, but decent. However, in two of the three aforementioned defeats, Berry struggled taking care of the ball:

That simply can’t happen against the Blue Devils; live-ball turnovers would be a backbreaker against a Duke roster that features two of the best transition players in the ACC — Luke Kennard and Amile Jefferson. Both players score around 1.3 points per possession in transition, according to Synergy.

On the flip side, Berry has played in 19 of UNC’s 21 wins. He missed the home wins over Tennessee and Davison — both of which were too close for comfort. In those 19 games, however, Berry shot 49.5 percent from the field, and 45.9 percent on three-pointers.

When things get stagnant for the Heels on offense, Roy Williams can rest easy at night knowing that Berry can get a bucket in isolation the majority of the time. In fact, Berry scores 60 percent of the time on isos, per Synergy. The junior shoots a shade under 53 percent on such possessions, and scores 1.28 points per possession — the best in the ACC.

Last season against Duke, Berry averaged 10 points per contest but slumped from the field — shooting a combined 5-of-23 (21.7 percent). On Thursday evening, he will have another shot at the Blue Devils.

If Duke is to slow down North Carolina’s potent offense, which is sixth nationally in adjusted points per possession, according to KenPom, then it is imperative that the Devils limit the Heels on the glass and once again neutralize Berry.

That’s easier said than done, though. It is a team game, but for UNC to grab a win at Cameron for the second straight season, Berry must rise above the rest.