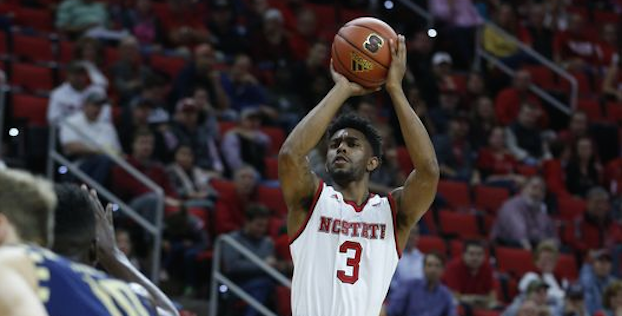 Terry Henderson and Torin Dorn have teamed up to provide a steadying force for NC State on the wings this season. The Wolfpack have struggled on defense, but Mark Gottfried’s club once again knows how to score the basketball; they currently rank 29th in the nation in adjusted offensive efficiency, per Ken Pomeroy. Henderson and Dorn, who combine to score nearly 35 points per game, have both shot well from all over the floor. Dorn’s actually the ACC’s leader in effective field goal percentage (68.5 percent).

However, the focuses of this is on Henderson and his proclivity to shoot 3-pointers. NC State’s offense needs a long range bomber with an accurate, quick trigger to keep the floor spaced around Dennis Smith Jr. Henderson, finally healthy, is doing just that, at a near record-setting rate.

The senior wing is averaging 7.3 attempts per game from beyond the arc. He’s already chucked 58 threes this season, which ranks third in the ACC — behind only Andrew White III (72) and Grayson Allen (60). Henderson has connected on his threes at an above average clip, too: 36.2 percent. If he continues this pace, Henderson will finish with one of the most prolific perimeter shooting seasons in NC State history.

Henderson’s currently averaging 7.3 attempts from deep per game. NC State has 31 games on their regular season calendar. The Wolfpack have already played eight games, which means they have 23 more remaining on the docket, plus at least one ACC tournament game — so a minimum of 24 games are on the horizon. If Henderson continues to shoot at this rate (nearly 62 percent of his field goal attempts have come from beyond the arc), and play a similar level of minutes, he could land inside the top five for NC State’s single season three point attempts.

Henderson is on pace, at the moment, to shoot 234 threes — not factoring in a potential postseason run, which would jump Tom Gugliotta back in 1991-92 for the fourth most in a single season in program history. It’s interesting to see how most of this list comes from two different eras of Wolfpack ball. Ralston Turner and Scott Wood, alone, make up 40 percent of the top 10 seasons in this category.

We all know that teams shoot more 3-pointers now than they did 25-30 years ago. The three point shot has been empirically proven to be significant function of an efficient offense. However, it’s neat that in the late 1980s and early 1990s Jim Valvano and Les Robinson gave players like Rodney Monroe and Gugliotta the green light.

Enough nostalgia, back to the present: Maverick Rowan has missed the last seven games with a concussion; however, when he returns to the lineup, there’s a chance he could cut into some of Henderson’s output. Regardless, Henderson, who is third on State’s roster in usage rate (21 percent), will continue to be a focal point of their offense. He’s also shot a sizzling 63.9 percent on two point field goals, which percentage-wise ranks within the top 150 nationally, according to Pomeroy. The senior is more than just a three point bomber.

Henderson is making the most of his final season in a Wolfpack uniform, and with a few more threes, it will be commemorated for years to come.