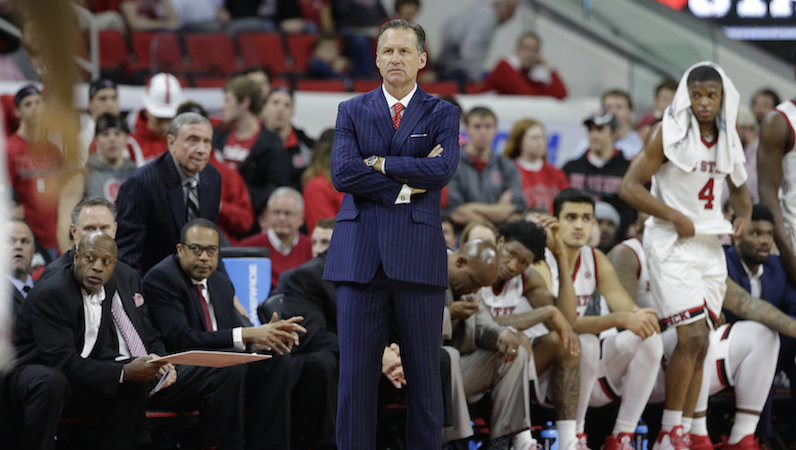 NC State had one of its best defensive performances of the season at Georgia Tech. (AP Photo)

NC State’s Tuesday night win at Georgia Tech was the team’s first victory in four weeks. It was also the Wolfpack’s second road ACC win of the season.

NC State can thank its defensive effort for the much-needed reprieve after several tumultuous weeks in Raleigh.

According to KenPom.com, this was just the second time all season NC State has held an opponent to under one point per possession. The only other time Mark Gottfried’s club achieved that benchmark was on Jan. 4 against Virginia Tech. Tuesday’s road win was the program’s second-best defensive performance since the calendar flipped to 2017.

Over NC State’s last nine games — dating back to the win at Duke last month — this was just the second time that the Wolfpack held an opponent to sub-50 percent shooting. Florida State shot 48.6 percent from the floor; however, in the loss in Tallahassee, NC State allowed FSU to attempt 31 free throws — the third time this season an opponent has recorded 30-plus attempts from the charity stripe against the Pack.

The win also marked the first time since a loss to Wake Forest in Raleigh last month when NC State held an opponent to an effective field-goal rate under 50 percent. Effective field goal percentage is similar to field-goal percentage but is adjusted slightly to account for the increased value of three-pointers. Not so coincidentally, Georgia Tech made just four three-pointers in defeat, which ties a season-low in allowed three-pointers for NC State. It is also the first time since the win over Appalachian State that an NC State opponent made fewer than five three-pointers.

In the team’s previous four games, State forced an average of just 8.5 turnovers per contest; against Georgia Tech, however, the Pack forced 11. Dennis Smith Jr., who ranks second in the ACC in steals, swiped three balls Tuesday night against the Yellow Jackets.

Truth be told: NC State’s defensive numbers would look far more gaudy if not for the final 140 seconds of game time. After Smith made a free throw to give the Wolfpack a 63-50 lead with 2:20 remaining, Georgia Tech caught fire. The Yellow Jackets scored 19 points over the game’s final two minutes and nearly came away victorious. Tadric Jackson had a chance to win the game for Georgia Tech on the game’s final possession, when Smith inexplicably abandoned Jackson on the wing. Lammers found Jackson, who bricked a would-be game-winner as the clock expired.

Tuesday’s performance means little for NC State in a more macro sense — Gottfried’s fate is sealed, and unless Smith unlocks Kemba Walker 2011 Mode at the ACC Tournament, postseason hopes are all but removed. However, it is nice to see this team defend with a little more verve, holding Ben Lammers to just 1-of-9 shooting for six points, and pick up a win after some uneasy times.