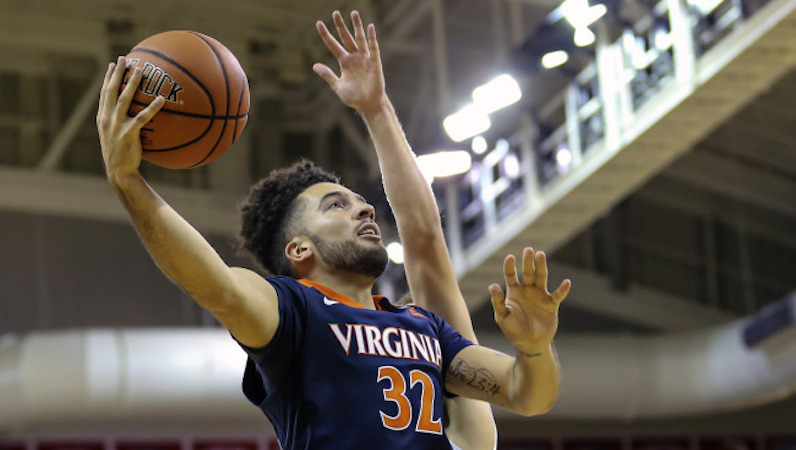 In Virginia’s recent win over Georgia Tech, London Perrantes joined Donald Hand, Sean Singletary and John Crotty as the only players in program history to record 1,000 points and 500 assists. The milestone was a testament to Perrantes’ experience and solid all-around game.

Now, in his senior season, the Cavaliers are finally his team.

Perrantes is Virginia’s leading scorer at 12.3 points per game — the lowest such total to lead any UVA team. That’s also a career-best scoring output for Perrantes, who is playing fewer minutes this season (30.6) but using more possessions — a usage rate of 22.8 percent, according to Sports-Reference.com.

He spends the majority of his possessions running off screens (35.5 percent), according to Synergy Sports. Darius Thompson has evolved as a playmaker (22.9 percent assist rate) along with Ty Jerome, which has freed up Perrantes to move off the ball some.

Perrantes, however, is better used on spot-up actions. According to Synergy, the senior ranks No. 1 in the ACC in points per possession (1.62) and shooting percentage out of spot-ups — 62.8 percent, which is wildly efficient. Drawing this out on a national level, of players with at least 50 spot-up possessions, the senior guards ranks No. 2 in points per possession. Virginia’s mover-blocker offense revolves around pristine spacing, shooting and passing. Perrantes satisfies.

Virginia ranks dead last nationally in adjusted tempo, per KenPom.com — 60.4 possessions per game — but when the team gets out in transition, success is plentiful. The team, which has played slightly faster in league competition (62.1 possessions), ranks second in the nation in transition efficiency; the Cavaliers score 1.31 points per possession in transition. UVA is shooting a ridiculous 67.8 percent transition, too, per Synergy, which is tops in the NCAA in shooting by a wide margin.

There are seven different Cavaliers who score 1.2 points per possessions or better in transition. That’s incredible balance.

Over half of Perrantes’ field goals (52 percent) have originated from beyond the arc, and he’s made 42.9 percent of those attempts. That ties him with UNC’s Joel Berry for 11th in the ACC. For his career, Perrantes has connected on 185 three-pointers — tied with Malcolm Brogdon for seventh-most in program history. That’s fitting because no two players have signified the Tony Bennett era in Charlottesville more than Brogdon and Perrantes.

The Cavaliers are on a roll; Bennett’s crew has won five in a row, including most recently a quality road victory over Notre Dame. Virginia is No. 4 in KenPom’s adjusted efficiency margin — the highest ranking of any ACC team. After falling just short in 2016, this is a team with serious Final Four aspirations. Next up for the Cavaliers: a road trip to Philadelphia and a meeting with the nation’s current No. 1 team (albeit not for much long) — Villanova.