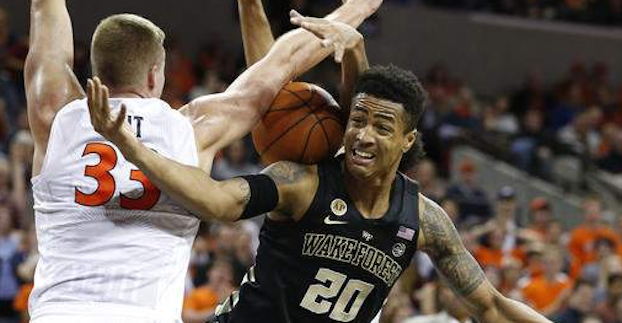 At the outset, conference play has been unkind to Wake Forest.

The Demon Deacons have dropped three of four ACC games — with the lone win coming at home against Boston College. Danny Manning’s club will try to reroute the ship Wednesday night, which is easier said than done when the opponent is North Carolina.

When Wake Forest and UNC meet for the 225th time in series history on Wednesday, the Deacons will need another major performance from John Collins. The sophomore forward struggled in the league opener — a loss at Florida State — when he scored just two points. In the last three games, however, Collins has ascended back to form: 17.7 points, 6.7 rebounds and 57.1 percent shooting from the field.

Collins leads the ACC in player efficiency rating (PER) — 32.1 — and has become the centerpiece of Wake’s four-around-one offense. As a roll man in pick-and-roll action, usually with Bryant Crawford orchestrating, Collins has scored 1.59 points per possession, according to Synergy Sports. This is extraordinary; it ranks No. 16 in the nation and second in the ACC behind only Ben Lammers of Georgia Tech.

Crawford and Collins have nice chemistry in Wake’s roll game, and the point guard has no issues tossing a lob to his big man for an alley-oop. The Demon Deacons, according to Synergy, score nearly 1.2 points per possession when Crawford hits the roller in screen-roll action.

Manning has fielded easily his best shooting team since arriving in Winston-Salem in 2014; Wake Forest has connected on nearly 38.8 percent (132-of-340) of its three-point attempts this season — a significant improvement over the two prior seasons. In the Deacons’ first four ACC games, that number has remained high: 37.5 percent (30-of-80).

Yes, it helps to have better shooters on the roster, like Keyshawn Woods and Austin Arians, who have both connected on better than 42 percent of their attempts from beyond the arc. However, a central element of a good shooting offense is a rim-runner who can set screens and dive-bomb to the hoop. Whether from up top or on the sides (a critical part of Wake’s offense), Collins fills that role; his gravity creates passing lanes and open jumpers for teammates. When defenders have to slide down to bump his lanes to the rim, shooters open up around the perimeter.

Last season, when Crawford was a passer in pick-and-roll action, Wake Forest scored just 0.89 points per possession, according to Synergy. That ranked No. 675 in the nation. This season, however, that’s increased to 1.43 points per possession — No. 40. It’s reductive to say that is the product of only one thing, but Collins’ emergence as a roll man is pivotal.

His range is limited, though. Collins has attempted only one three-pointer during his 47 games as a Demon Deacon — which he missed earlier this season against Xavier. He rarely attempts jump shots in general, and he spends the vast majority of his time around the basket. That’s also by design because Collins is a gifted offensive rebounder; according to KenPom.com, he ranks 12th nationally in offensive rebounding rate — 16.4 percent. He has, however, struggled to finish on some of those looks, shooting 57.1 percent on putbacks, per Synergy.

When the half-court sets are clogged, teams need to get out and run. It’s much easier to score against a defense that isn’t yet set, trying to sort through crossmatches and the like. Wake doesn’t field a roster of speed demons, but the Deacs can push the tempo when they want, and Collins has been a beast in the open court. He ranks fourth in the ACC in transition scoring — 1.5 points per possession.

Keep an eye on Collins for the rest of the season. If Wake Forest (No. 26 in adjusted offensive efficiency) is humming on offense, he will be in the middle of all of it.