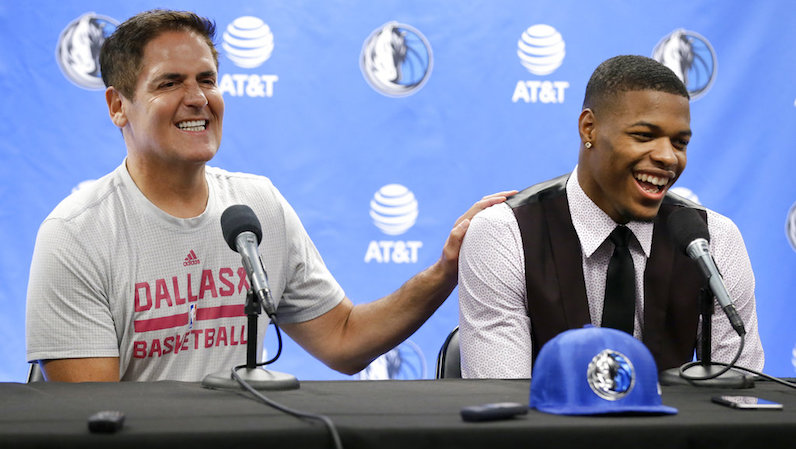 Everyone, step inside the laboratory; it’s time for some Small Sample Size Theatre. It’s amazing to see how popular the NBA Summer League has become over the last decade. With that increase in popularity, the action in Las Vegas has become increasingly examined.

It’s a bit silly to extrapolate Summer League production too much. The talent pool is thinner, and the style of play is a bit different from a regular season NBA game, too.

All of that said, it’s worth taking note of what former NC State point guard Dennis Smith Jr. is doing for the Dallas Mavericks in Las Vegas.

Smith, the No. 9 pick in the 2017 NBA Draft, has stolen the show out west — crazy stat lines, and a bevy of finishes at the rim that have garnered social media traction. Dallas may have the steal of the draft.

He isn’t alone, either. Former ACC foe Donovan Mitchell has been a juggernaut, too. However, let’s take a quick check on what DSJ has done in Vegas.

In his first three Summer League games, Smith has run wild. He’s averaging 18.3 points per game; this includes his 25-point performance against the Phoenix Suns. Smith is tied for 12th in scoring amongst players that have played more than one game.

Much like his brief stint in the ACC, though, the rookie point guard has done a little bit of everything. Smith is also averaging six rebounds, five assists and 2.3 steals. He’s done all of this while shooting above 47 percent from the field. The former All-ACC guard is the only player averaging 18-plus points and at least five assists.

One of the most impressive things from Smith has been the ability to finish at the rim. He has simply incredible body control — mixed with his leaping ability, it’s a crazy combination.

This shouldn’t come as too much of a surprise, though. Smith was a force at the rim during his freshman season, too. According to Synergy Sports, Smith shot 60.7 percent on non-post-ups at the rim. That was good for 11th in the ACC amongst players with at least 100 possessions.

Some of his best work comes before the game even starts

One of the incredible things about Dennis Smith’s freshman season at NC State was that his most memorable play happened after the buzzer sounded — his jaw-dropping dunk that punctuated his 32-point masterpiece in the road upset of Duke. T-shirts were made to commemorate the event.

Now, as a professional, Smith has caused mouths to hit the floor with some of his handiwork in pregame warmups.