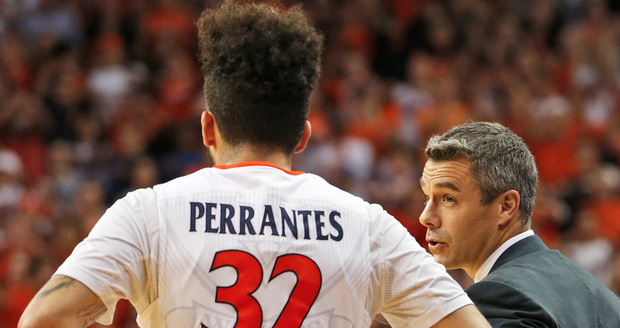 Virginia basketball is currently ranked No. 13 in the country. The Cavaliers are 8-1 — with that lone loss coming at the hands of a good West Virginia team. UVA also ranks 11th in the nation in terms of adjusted offensive efficiency. These are all indicators of a good team, which is exactly what Virginia is. However, it’s safe to say that Tony Bennett’s club is doing things differently than any other Top 25 program.

There is only one team inside this week’s AP poll that has only one player averaging more than 10 points per game: Virginia. Senior point guard London Perrantes leads the Cavaliers in scoring (10.2); Marial Shayok is No. 2 on the team — 9.6 points per game.

It’s well known that the Cavaliers, under coach Tony Bennett, like to slow things down on the offensive end. According to Ken Pomeroy, Virginia ranks dead last in the nation in terms of adjusted tempo. They average fewer than 59 possessions per game. No other team in America averages less than 61 possessions. If they continue to embrace this pace, UVA would tie the slowest tempo of Bennett’s tenure in Charlottesville — back in 2014-15, before college basketball reduced the shot clock to 30 seconds.

This style of play works because Virginia is excellent on defense; they grind teams to a pulp on that end of the floor. For the fifth time in the last six seasons, the Cavaliers are a top 10 defense: 88.6 points per 100 possessions (No. 2 in the nation). The Cavaliers are efficient on offense because they have to be. Virginia ranks 29th in two-point shooting percentage (56 percent); they also rank 64th in three-point shooting percentage (38.7 percent). As a team, the Wahoos have a true shooting rate of 58.9 percent, which is excellent.

They have turned the ball over just 81 times this season, which is the fewest in America, and is vital toward them maintaining efficiency.

The Cavaliers have five straight seasons with at least 22 wins; they’ve gone to the NCAA Tournament in four of those five seasons. By the looks of it, Perrantes and Bennett are on pace for yet another successful campaign in Charlottesville.