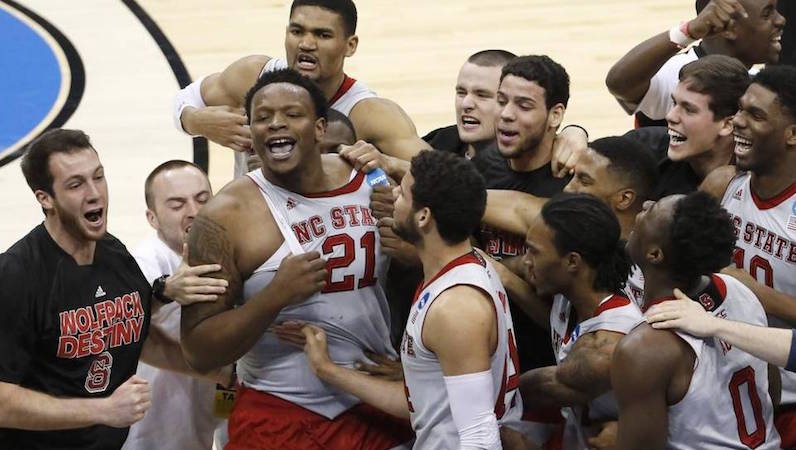 The highlight of BeeJay Anya's career will likely be his game-winning shot in the 2015 NCAA Tournament against LSU. (AP Photo)

NC State has just one game remaining on its regular-season schedule: Wednesday night at Clemson. Shortly thereafter, a disappointing season in Raleigh will conclude. With it will also come the end of a college career for NC State’s lone senior — BeeJay Anya — who has precious time left in his college track.

Anya said his goodbyes to the Wolfpack faithful last Saturday in an emotional Senior Day ceremony. It has been a tumultuous year for NC State basketball and Anya, which presents an opportunity to look back on the first four-year senior to finish his career under Mark Gottfried at NC State.

The most memorable moment of Anya’s time in red and white will undoubtedly be his game-winning left-handed hook shot against LSU in the second round of the 2015 NCAA Tournament — one of those salient plays that lives on in the minds of those who watched.

The shot came just weeks after Anya, then a sophomore, was named to the ACC’s All-Defensive team and tabbed the conference’s Sixth Man of the Year. It was also not the first time an alum from DeMatha Catholic High School found himself playing hero for the Wolfpack in a major NCAA tournament game. His path to stardom seemed like destiny.

In the fall of 2015, as buzz surrounded Mark Gottfried’s fifth season in Raleigh, Anya appeared ready to take on a larger role for the Wolfpack. The team, coming off its fourth straight NCAA tournament appearance, returned several key players, including Anya, who was in the best shape of his life. While the 2015-16 season fell short of several preseason goals, optimism around the program remained high, especially with the arrival of Dennis Smith Jr.

After playing at a slimmed down 285 pounds as a junior, Anya showed up to fall camp in 2016 weighing a reported 344 pounds. From there, Anya’s senior season, unfortunately, never really got off the ground. The Wolfpack featured a congested frontcourt rotation and frequently went small; Torin Dorn played as a stretch 4 around one traditional big man — usually Abdul-Malik Abu.

With one game left on NC State’s regular-season schedule, Anya has appeared in 26 games, which would be a career low. The flashes of defensive brilliance are still there: On man-to-man possessions defended by Anya, opponents have scored just 0.47 points per possession, which ranks second in the ACC among players who have defended at least 30 possessions, per Synergy Sports. His block rate is still an impressive 9.6 percent, according to KenPom.com, but if it stays there, it will be another career low.

Anya has blocked 243 shots and will end his career as the Wolfpack’s all-time leader in rejections. The final total, however, could be significantly higher. As a sophomore, Anya recorded a ridiculous 8.1 blocks per 100 possessions. According to KenPom, Anya rejected 13.4 percent of the two-point field goals attempted while he was on the floor, which ranked No. 5 in the nation; in ACC play, that number jumped to a league-leading 14.2 percent. Opponents shot just 29.9 percent against Anya on half-court possessions, per Synergy Sports. If he had been able to build upon this, Anya could have been the most dominant defensive center in the nation.

The former 4-star recruit maxed out on the offensive end during his sophomore season, too. Anya ranked No. 71 in the nation with a field-goal rate of 61 percent on two-point attempts, and while he has never featured a strong back-to-the-basket game, Anya did discover several efficient means of scoring around the basket. In 2014-15, according to Synergy Sports, Anya shot 66.7 percent off of cuts and scored 1.4 possessions (85.7 field-goal percentage) as a roll man in pick-and-rolls. This season, though, that dipped to one point per possession (66.7 field-goal percentage) as a roll man.

According Synergy, there are 44 players in the ACC who have recorded at least 20 post-up possessions this season: Anya ranks 38th in field-goal rate — 34.8 percent. As a sophomore, Anya scored 42 points on putbacks following offensive rebounds; that dropped to 12 points this season.

KenPom’s comparison metric lines up Anya’s sophomore year performance with that of Justin Hamilton (Iowa State) and Festus Ezeli (Vanderbilt) in 2010; both of those players, by the way, are in the NBA combining to make over $10 million just this season. Anya, with his wingspan and ability to block shots, had the chance to blossom into an intriguing NBA prospect. A lack of a post game would not have really mattered; the professional ranks prefer centers to be defense-oriented shot-blockers who can screen and roll on the other end — a mold Anya had the ability to fit. That outlook, however, seems rather unlikely now.

Who knows? Maybe Anya will work his way back into shape and find a way to make lots of money playing basketball. The “what-if” factor will play a role in how we evaluate Anya’s career, but regardless of the numbers or pro prospects, the big fella will go down as one of the most important and beloved players of the Gottfried era. Anya was a defensive force who could occasionally dominate at the rim, and a member of the 2015 Sweet 16 team.

He endeared himself to the Wolfpack fanbase with an infectious smile and the ability to turn a crowd from milquetoast to ravenous in a blink. All it took was one monster rejection, a head waggle and, all of a sudden, PNC Arena would be whipped into a frenzy.

College basketball is not always about wins and losses or finding a way to the NBA. Sometimes, what matters most is the ability to create joy and memories. Anya’s career may have fallen short of some expectations, but in other areas, he shined through. His jersey will never hang in the rafters along with Thompson and Hodge, but it will be a long time before Tobacco Road forgets the unique talent that is BeeJay Anya.