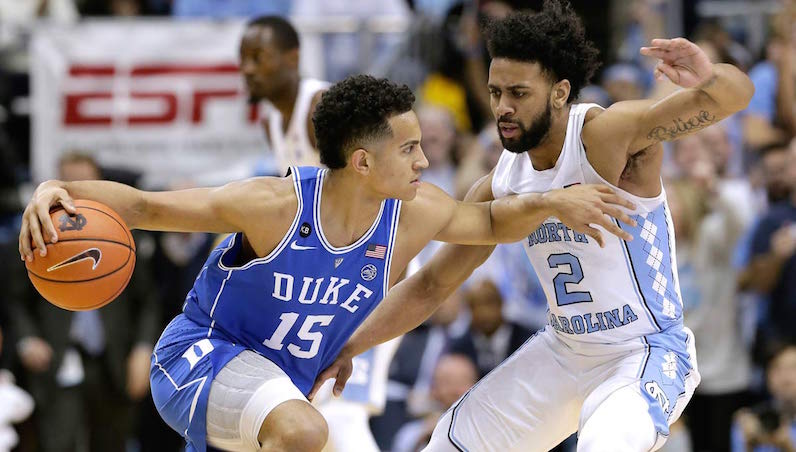 Four ACC NCAA Tournament teams are in action on the first Friday of postseason play.

As each of these four teams heads into its first-round matchup, below are the key stats you need to know for each contest. In Part II of this breakdown, we will focus on the four teams playing on Friday.

(Here is Part II of the breakdown)

According to FiveThirtyEight, Louisville has the lowest probability of all top eight seeds to win the NCAA Tournament. The forecast model gives the Cardinals a five percent chance of winning the school’s fourth title. All things considered, those are pretty darn good odds; teams scrap just to have a five percent chance of winning championships, regardless of the sport.

The Cardinals are dominant defensively, which we already know. Louisville ranks No. 7 in the nation in defensive efficiency, according to KenPom.com. Rick Pitino’s club turns you over and ferociously defends the three-point arc. Opponents have connected on just 30.9 percent of threes — good for No. 17 nationally, according to KenPom.

This is Louisville’s best three-point shooting squad since the 2013-14 season, and the team has connected on 36 percent of its launches from beyond the arc. It will not come as much surprise, though, that Louisville shot better from distance in its victories. No duh — winning basketball teams often shoot the ball well. The difference for the Cardinals, however, is fairly jarring:

In Louisville’s 24 wins, the Cards shot 39.7 percent from distance. That is 16 percent higher than the shooting rate in defeats, which is a wide margin.

Quentin Snider and Deng Adel are two very good players, but I see them more as third options trying to disguise themselves as sidekicks for Donovan Mitchell. They are both capable of big performances, but that is not always quite enough. Snider lit up Kentucky earlier this season; Adel was outstanding as Mitchell struggled in the ACC Tournament loss to Duke.

Accurate volume shooting will be key for at least one of those two. Louisville has the goods to make yet another Final Four, but a premium must be put on perimeter accuracy.

North Carolina needs scoring from its best player, Justin Jackson, to hit its ceiling. But more important than Jackson’s long-range marksmanship will be the play of junior point guard Joel Berry.

Berry is one of the ACC’s top players, and when he is on, UNC looks borderline unstoppable. The Tar Heels have lost just seven games this season; in six of those losses, Berry shot under 45 percent from the field, including his disastrous 0-of-8 outing at Miami. His only plus-performance in defeat came in the Malik Monk game against Kentucky.

It is more than just shooting, though. UNC needs his penetration game going, too. Berry has to get north-south on pick-and-rolls and off the bounce. When things bog down, it is up to him to create. That is what opens those money catch-and-shoots for Jackson and dump-offs to Kennedy Meeks, Isaiah Hicks and Tony Bradley.

The junior is one of the very best isolation scorers in the nation. According to Synergy Sports, Berry shoots 48.6 percent on isolation and scores 1.16 points per possession. That ranks 76th in the nation and second in the ACC among players who have used at least 30 possessions.

The Heels will breeze past Texas Southern on Friday, which will set up a date with Arkansas or Seton Hall. North Carolina has the goods to get to a second straight Final Four, but to do so, it may need to get past Kentucky or UCLA, which means De’Aaron Fox and Lonzo Ball — two top-10 picks. Berry must have his A-game if UNC is to get to Phoenix.

If there is a better player than Jayson Tatum in America, it’s hard to identify who it might be. My word, this rookie is special. He has dazzled all season long as a scorer, but lately the freshman has discovered an amazing passing game. Tatum can distribute from a variety of situations and angles — all of which were on display in Brooklyn last week.

The dagger three that Matt Jones hit in the championship game was set up by Tatum running a pick-and-roll. Look at how much Notre Dame’s defense bends to keep track of Tatum coming off the ball screen. There is not a single Notre Dame defender on the right side of the floor, which is where Jones is stationed. Matt Farrell is the closest player to Jones, and he has both feet planted in the paint. This is the type of attention that Tatum draws.

Tatum goes left and is somehow able to see Jones spotted up and whip it back to his teammate. The vision and athleticism this takes is off the freaking chart. The ball finds Jones right in the shooting pocket, too. Connecting with the weak-side shooter like this is such an NBA-type move.

According to Synergy, Tatum’s teammates shoot 50 percent following a pass from the freshman out of pick-and-rolls.

Tatum is one of the ACC’s most efficient post-up scorers, but in Brooklyn he demonstrated that he has the ability to sling dimes when he draws an extra defender as well. This pass he throws to Jones will leave your head spinning.

Tatum’s teammates now know to have their heads on a swivel when he has the ball. A pass could come at any moment. As the year winds down, you will be hard-pressed to find a more complete player in college basketball. The evolution of Jayson Tatum continues.

Miami’s Bruce Brown will not be the only stud freshman in this matchup. Michigan State possesses one of the 15 best NBA prospects in college ball: forward Miles Bridges.

In senior forward Davon Reed, the Hurricanes possess one of the best defensive stoppers in the ACC, and he will likely draw the Bridges assignment. That said, Bridges can be a lot to handle.

The first thing that comes to mind with the freshman from Flint is his explosive leaping ability; Bridges may be the best in-game dunker in college hoops this season. As a cutter, Bridges scores 1.46 points per possession on 78.1 percent shooting — both of which rank third in the Big Ten, according to Synergy Sports. Bridges also shoots nearly 61 percent on non-post-ups at the basket. Here is one of them.

Bridges is more than just a leaper, though; he can fill it from deep, too. Bridges hit 42 percent of his three-pointers in conference play, and according to Synergy Sports, the rookie has connected on 39.6 percent of his catch-and-shoot opportunities this season. Per Synergy, Bridges has a solid 45.2 percent shooting clip when coming off screens.

He is also versatile enough to use at least 20 possessions on both ends of the pick-and-roll — as a ball-handler and as a roller. The efficiency numbers are not quite there, but the fact that he can even attempt this at age 19 is rather impressive.

Michigan State is already down guard Eron Harris for the remainder of a season due to a nasty lower body injury suffered against Purdue. Bridges will be at the top of Miami’s Round 1 scouting report.