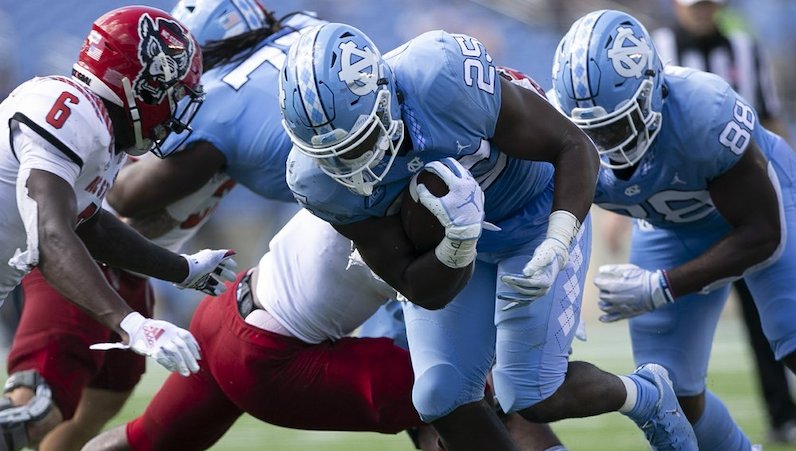 North Carolina's Javonte Williams (25) rushes for a first down against N.C. State in the first half of an NCAA college football game on Saturday, Oct. 24, 2020 in Chapel Hill, N.C. (Robert Willett/The News & Observer via AP)

In this week’s ACC Football Power Rankings, we go through all 15 teams and try to make sense of the league’s murky middle tier.

Trevor Lawrence looked sorta pedestrian (6.7 yards per attempt) as Clemson played below expectations for the majority of Saturday’s 47-21 win over Syracuse; however, the Tigers closed strong with 20 unanswered points, including two rushing scores from Travis Etienne.

Notre Dame put forth its best game of the season with a dominant 45-3 victory over Pittsburgh on Saturday. Quarterback Ian Book threw for 312 yards, while averaging 10.4 yards per attempt, and three touchdowns — all season highs.

For the first time this season, current #NotreDame QB Ian Book is ahead of former Irish QB Phil Jurkovec (now at Boston College) in passing efficiency — 143.5 to 139.3. They have 2 common opps: Duke and Pitt. BC visits No. 1 Clemson on Saturday. pic.twitter.com/o7ahfaIcYq

For the third straight game, Miami struggled to run the ball; Virginia held the Hurricanes to just 2.54 yards per carry. D’Eriq King completed 21-of-30 pass attempts (70 percent) for 322 yards (10.7 yards per attempt) and a touchdown, though, which proved to be the difference.

Mike Harley: "Someone had to get out of their comfort zone, so Coach made it a challenge. Me being an older guy, a senior, I had to step up. I had to stay consistent."

Veteran receiver Mike Harley stepped up in the absence of Brevin Jordan; Harley hauled in 10 receptions for 170 yards (both career highs), including a 43-yard touchdown reception to open things up.

UNC avoided turnovers (+4 turnover margin) and racked up 578 yards of total offense. Sam Howell looked comfortable in the pocket, throwing for 252 yards. Once again, the Heels were led by the dynamic duo of Javonte Williams and Michael Carter, who combined for 312 yards from scrimmage and four touchdowns.

This marks just the fourth time since the 2000 season that UNC has run for 300+ yards and 5+ touchdowns in a single game — three of those performances have occurred over the last two seasons.

Most forced missed tackles on runs in Wk 8

On the flip side, NC State was held to just 34 rushing yards, total. This game also marked just the second time since 2000 that UNC has run for 300+ yards while limiting an opponent to under 40 total rushing yards.

Up to No. 15 in the Sagarin ratings (No. 4 amongst ACC teams), Wake Forest keeps on trucking. Dave Clawson’s squad has three straight wins — all at home — including last week’s 23-16 upset over nationally-ranked Virginia Tech.

Unheralded freshman safety Nick Andersen, a walk-on, stole the show vs. the Hokies: 11 total tackles and three interceptions. An unrated 2020 prospect — New Hampshire and Butler were the only two programs that offered scholarships — Andersen became just the second ACC player since 2000 to record 10+ tackles and three interceptions in the same game.

After several prolific performances, Virginia Tech’s run game finally hit a wall. The Hokies still ran for 210 yards (4.9 per carry) in Winston-Salem, but it wasn’t enough to defeat Wake Forest. When the pass game was called on for help, Hendon Hooker and Virginia Tech simply didn’t have it.

Hendon Hooker's two lowest PFF grades have come against Wake Forest. Not sure what it is about the Deacs, but they have his number. I would expect a bounce back performance against a more attackable Louisville defense.

Khalil Herbert was mostly held in check, too — rushing for 64 yards, the first game this season the Kansas transfer has run for fewer than 100 yards.

Following a tough loss at Virginia Tech, which included five turnovers, Boston College responded on offense against Georgia Tech: zero turnovers and an average of 6.3 yards per play.

The Eagles ran the ball 44 times against the Yellow Jackets, compared to only 21 pass attempts from Phil Jurkovec. (Jurkovec did connect with CJ Lewis for two touchdowns in this game, though.) David Bailey got going, too, which is encouraging: 84 rushing yards (6.4 per carry) and two touchdowns.

No Devin Leary proved pivotal for NC State’s offense, which never quite found traction with Bailey Hockman under center. (The biggest issue of the Pack on Saturday came on defense, though: NC State did a poor job tackling.)

It’ll be interesting to see what the quarterback situation looks like going forward; true freshman Ben Finley made his college debut and showed some flashes in Chapel Hill, including a 42-yard touchdown connection with Emeka Emezie.

"He gave us the spark that we needed. I thought he played well. It was good to see him out there today." — Gibson on Ben Finley

Following Saturday’s blowout defeat at the hands of Notre Dame, Pitt has now lost four games in a row. The first two of those four were both tough one-point losses; subsequently things have gotten worse, though.

Pitt’s run defense was solid (once more) against Notre Dame, but the Panthers just can’t muster any offense minus Kenny Pickett.

Without Pickett, freshman Joey Yellen, in his second career start, completed just 10-of-27 pass attempts (37 percent) for 101 yards and three interceptions. Unenviably, Yellen became the 13th ACC quarterback since the 2000 season to throw 3+ interceptions and complete under 40 percent of his pass attempts (20+ attempts) in a game.

Pickett may be back in time for Florida State in two weeks, but that’s no certainty at the moment.

Virginia has won three straight over North Carolina, but to keep that streak alive in 2020, the Cavaliers will need more from an offense that ranks outside the top 50 nationally in efficiency, per ESPN.

It’s been an uneven season for Louisville thus far, but the Cards put together a good outing against an FSU team that was exactly what the doctor ordered.

Tutu Atwell recorded 131 yards from scrimmage and two touchdowns on only four touches (32.8 yards per touch); however, it was running back Javian Hawkins that truly powered the offense. Hawkins ran for 174 yards and three touchdowns on 16 carries.

Javian Hawkins is the first Louisville player with 3 Rush TD in a game since Trey Smith in 2018!@UofLFootball | #ACCFootballpic.twitter.com/cJ1nabOMXg

Hawkins now has five career games with 150+ rushing yards, including three this season. He leads the ACC with 693 rushing yards.

Georgia Tech opened as an 18-point home underdog to Notre Dame. Buckle up.

The road matchup at Louisville was an ugly one for Florida State, which suffered 11 penalties for 104 yards, while its passing attack slumped, once more.

Jordan Travis completed 43.8 percent of his pass attempts while averaging only 4.4 yards per attempt. True freshman Chubba Purdy made his college debut in relief of Travis, but did so unceremoniously: attempting nine passes without a completion.

Chubba Purdy starts his college career going 0 for 9 against Louisville.

Hopefully the open weekend bought Duke time to regroup and get ready for a Halloween matchup with Charlotte — this year’s lone non-conference game.

Syracuse played well at times against Clemson (and covered!), but the Orange still fell on the road by 26 points. Dino Babers and Syracuse have a point differential of -76 this season; all five of their losses have been by 11 or more points.