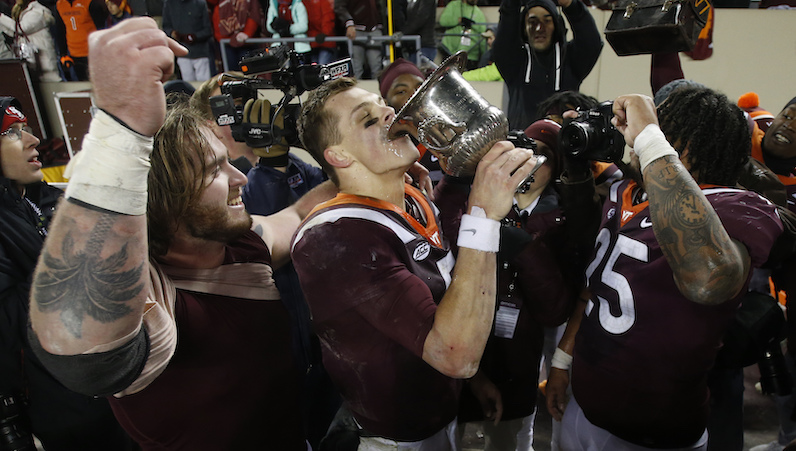 There’s just one week remaining in the 2019 regular season for college football. This brings us to our penultimate ACC Football Power Rankings for 2019. With a focus on a rather important Commonwealth Cup, let’s dive in.

Clemson heads into this week’s matchup with rival South Carolina as a serious (+24.5) favorite. After losing five straight (2009-13), the Tigers will look for their sixth consecutive victory over the Gamecocks (2014-18) as the concerns around head coach Will Muschamp continue to mount.

After that, it’s another trip to Charlotte for the ACC title game. This marks the fifth consecutive season that Clemson will represent the Atlantic Division for this game.

Next up: at South Carolina

Bud Foster’s last game at Lane and his unit posts a goose 🥚.

Again, since the home loss to Duke at the end of September, Virginia Tech has gone 6-1 with a point differential of +117.

Oh, boy. The stakes can’t get much higher than this: with a ticket to play Clemson in the ACC Championship Game on the line, Virginia hosts Virginia Tech — a rivalry game that the Cavaliers haven’t won since 2003.

Virginia Tech has held the Commonwealth Cup for 5474 days. #Hokies

The last time Virginia defeated Virginia Tech it happened on the same date — Nov. 29, 2003 — that LeBron James played just the 17th game of his NBA career. He’s now in Year 17 of his NBA run of dominance. Yeah, it’s been a minute, y’all.

Running back Javian Hawkins brought the hammer as Louisville pounded Syracuse, 56-34. Hawkins ran for a career-best 233 yards and a touchdown on 23 carries. As Louisville gets ready for the regular season finale against Kentucky, Hawkins (1,278 rushing yards in 2019) ranks third in the ACC with 116.2 rushing yards per game.

Louisville’s offensive line just came back out onto the field with Dwayne Ledford and some family to take a group picture. Then Javian Hawkins came sprinting out, game ball still in hand, to join them … pic.twitter.com/PRvtNo8NSx

Up next: at Kentucky

Quarterback Jamie Newman was brilliant in Wake Forest’s 39-27 win over Duke on Saturday: 284 passing yards, 144 rushing yards and two total touchdowns. Newman joins Oklahoma’s Jalen Hurts as the only FBS quarterbacks to throw for 250+ yards and run for 140+ yards in the same game this season.

Up next: at Syracuse

After back-to-back wins over Georgia Tech and North Carolina, Pittsburgh’s offense went in the wrong direction at Virginia Tech. This game marked the first time Pittsburgh has been shutout in 11 years — back to the 2008 Sun Bowl. (Oregon State won 3-0 that day in what I can only imagine was an absolutely scintillating game of college football.)

Up next: Boston College

For just the second time all season, North Carolina played a game that didn’t end as a one-possession affair. UNC, predictably, dominated Mercer on Saturday, 56-7. Sam Howell attempted just 13 passes, completing 10 of them, including three touchdowns.

With his 2nd Pass TD of the day, Sam Howell set the UNC single season record for Pass TD (31).

He also passed Trevor Lawrence for the most Pass TD by a true freshman in FBS history pic.twitter.com/HMIy8gtXZF

Michael Carter ran for 159 yards and three touchdowns on nine total carries — 17.7 yards per rush. Carter is just the second ACC player this season — joining Clemson’s Travis Etienne — to rush for over 150 yards on 10 or fewer carries.

Up next: at NC State

Florida State has won four straight games at Florida, dating back to the 2011 season. Can FSU get yet another win at The Swamp, which would improve Odell Haggins to 3-0 this season?

Odell Haggins is here for his Monday press conference. Says they had a great recruiting weekend and that the current players were able to focus on academics. pic.twitter.com/3D1wDomm7i

Up next: at Florida

Talk about a team with absolutely bizarre vibes, man. Miami is one of the most baffling, up-and-down college football teams of the 2019 season.

Prior to the FIU loss, Miami won three straight games, including road contests at Pittsburgh and Florida, which ended the Willie Taggart era in Tallahassee. The Hurricanes even had an off week to prepare for FIU, too. However, things just totally collapsed for Miami on Saturday. It’s not as though the Golden Panthers played perfect football, either; FIU committed 14 penalties and still, somehow, won the game.

Well, let’s check in on first-year head Manny Diaz and see how he’s processing everythi—OH MY! (Everything’s going to be fine, Coach!)

Manny Diaz: “One of the darkest nights in this program’s history. That’s on me. I’ve got to take the responsibility for that.” pic.twitter.com/Ryrts1KpwM

Up next: at Duke

Since Boston College crushed NC State back on Oct. 19, the Eagles have gone 1-3, and the most recent outing of that stretch ended with a 33-point blowout loss at Notre Dame.

There are eight fewer bowl-eligible teams than slots.

These are the potential 5-7 teams who'd go first because of APR. Ranked in order:

Up next: at Pittsburgh

During the 2019 season, there have been eight games when an ACC team failed to produce at least 400 yards of total offense, turned the ball over two or more times and completed fewer than 10 passes — three of which have come against Clemson, the No. 1 defense in the FBS.

Those teams have a combined recorded of 1-7 in those games. The lone win came when Georgia Tech defeated NC State last Thursday.

Up next: North Carolina

The Blue Devils continued to slide backwards on Saturday — losing at Wake Forest by two touchdowns. Damond Philyaw-Johnson did some cool stuff, though, returning two kickoffs 90+ yards for touchdowns.

The loss at Louisville marked the third time this season Syracuse has allowed 55+ points in a game. This season can’t end fast enough for Syracuse.

Here is what Dino Babers said about pulling Tommy DeVito on the 4th-and-9 play for Clayton Welch. Said it was his decision, not made on consult with medical trainers. pic.twitter.com/vRZTRqxPAp

Up next: Wake Forest

Last Thursday’s win over NC State would’ve been the ideal coda on the 2019 campaign for Georgia Tech — one that’s seen the Yellow Jackets take some lump while rebuilding. This, however, isn’t an ideal world.